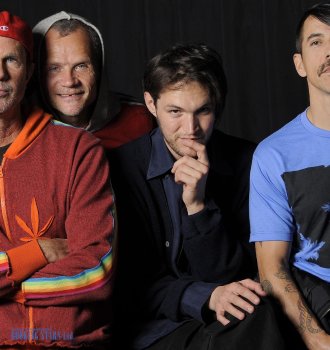 The funk rock band Red Hot Chili Peppers (RHCP) was formed in 1983, in Los Angeles. The current lineup includes Anthony Kiedis, Flea, Chad Smith, and Josh Klinghoffer. They are particularly famous for such songs as “Scar Tissue”, “Californication”, and “Under the Bridge”. The band holds numerous awards, including 6 Grammies and 8 MTV Video Music Awards.

RHCP is a unique band. Their music is a complicated mix of punk, hard rock and funk with a psychedelic touch. The band members say that they were influenced by such artists as Jimmy Hendrix and James Brown. Initially, the band had a pretty long name Tony Flow and the Miraculously Majestic Masters of Mayhem. They attracted attention with their performance at the nightclub with the song “Out in LA”. Soon they signed a contract with EMI.

Due to lineup problems and producer’s pressure, the first studio album The Red Hot Chili Peppers (1984) wasn’t successful. Neither was the second LP Freaky Styley (1985). The failure of the second album was attributed to the excessive drug use of the band members. They went on a tour in support of the LP, which was also a failure.

After going through rehabilitation, the musicians finally released a more or less successful album The Uplift Mofo Party Plan (1987). It reached the 148th spot on Billboard 200. After the release of the LP, the band experiences several major lineup changes. As a result, their new album Mother’s Milk (1989) was a success, reaching the 52nd spot on Billboard 200. In support of the LP, RHCP went on a tour and became popular abroad.

In 1994, the band released their new LP Blood Sugar Sex Magik, which was a huge hit selling over 7 million copies in the USA only and almost 14 million worldwide. It was the most successful LP of the band to date. It brought RHCP their first Grammy Award. After the release of this LP, each new studio albums got higher spots on the charts. Even though none of the LP managed to repeat the success of Blood Sugar Sex Magik, the band’s popularity hasn’t been waning. Their latest album to date The Getaway (2016) reached the 2nd spot on Billboard 200 and UK Albums Chart.