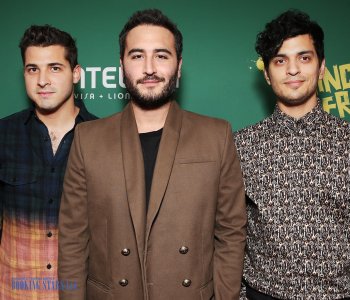 Reik is a charting, award-winning, Latin pop trio from Mexicali, Baja California famous throughout Latin America for their romantic songs and ballads. Their multi-platinum-selling albums Un Dia Mas (2008) and the Latin Grammy-winning Peligro (2011) were essentially homes for their numerous chart-topping singles that saw the band emerge from club to international success.

Forming in 2003 after recording a demo that yielded the Mexican underground club favorites "Levemente" and "Ahora sin Ti," singer Jesús Alberto Navarro Rosas and guitarist Julio Ramírez Eguía invited backing vocalist/guitarist Gilberto "Bibi" Marin Espinoza to join the lineup in early 2004. After signing to Sony Music a few months later, Reik teamed with producers Abelardo Vázquez and Kiko Cibrian to begin work on their self-titled debut LP. The album proved a phenomenon, generating three consecutive Mexican chart-toppers in "Yo Quisiera," "Que Vida la Mia," and "Noviembre sin Ti." All three singles also crossed over to the U.S. Latin pop charts, and in mid-2005, Reik mounted a brief U.S. tour; the trio also received a Latin Grammy nomination in the Best New Artist category. The pre-release single "Invierno" was issued in September, followed by the live Sesion Metropolitana DVD in November, and their sophomore album, Secuencia, in December. The latter peaked just inside the Top 30 on the Latin Album charts. Three additional singles from the LP placed on various Latin sales and airplay charts.

2008's Un Dia Mas fared better, placing inside the Top Ten Latin Albums and netting them the number three single "Inolvidable," and three more singles that landed on lower rungs. The full-length netted them a Latin Grammy Award for Best Pop Album by a Duo or Group with Vocals in 2009. Mexican and U.S tours followed the next year. The group re-emerged with Peligro in 2011. Helmed by three different producers -- Remy Palacios, Kiko Cibrián, and Ettore Grenci -- it netted five charting singles. It was certified platinum in Mexico and hit number three on the pop charts. In the U.S., it peaked at number two on Latin Pop Albums and number three on Top Latin Albums charts. Another extended international tour -- which took them to South Korea -- culminated in the live offering En Vivo Desde el Auditorio Nacional in 2013. Two years later, the trio entered the Viña del Mar International Song Festival and won first and second place awards for their entries.

Well established with their pop songs and romantic ballads, Reik sought to shake things up when they re-entered the studio. While the pre-release single "Voy a Olvidarte," issued in January 2016, was of familiar ballad stock, it landed inside the Top 20. The bilingual second single, "Spanglish," wed vintage early-'60s rock, surf, and big-beat pop, while "Ya Me Enteré" explored both folk and reggaeton with urban star Nicky Jam as a featured guest. Des/Amor was released in June of that year and marked the band's first studio recording in five years and placed near the top of the streaming and digital charts on all major platforms. Reik returned in 2018 with the collaborative single "Me Niego," featuring Ozuna and Wisin. They teamed up with Maluma the following year for the sultry single "Amigos Con Derecho." The band's sixth album, Ahora, arrived in May 2019 with numerous guest spots from returning collaborators Ozuna and Wisin as well as Maluma, Manuel Turizo, and Tommy Torres. Reik stayed busy throughout the front half of 2020 with a number of singles including "Bésame (I Need You)" with R3hab and Tini.

How much does it cost to book Reik:
Price inquiry
Reik booking agent:
Contact agent
Reik Contacts:
Send Reik a message
« previous next »