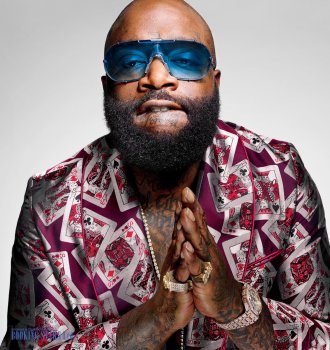 Rick Ross is an American rapper, a brilliant representative of the genre Dirty South.

Rick Ross is a rapper from Miami who caught the attention of a titan like Jay-Z, as a result of which he was signed to Def Jam. The debut on the label took place to the sounds of the anthem hit Hustlin '.
After the success of the main song in Rick Ross's career so far, he has already worked with a whole scattering of "stars", including Jay-Z, Busta Rhymes, Akon and Mario Winans.

Rick Ross is one of the main stars of recent years, who made the whole world repeat his Hustlin '. Possessing sufficient charisma and a flair for hit things, he easily managed to gain a foothold in the first echelon of artists.

Rick Ross (whose real name is William Roberts) was born in Carol City, Florida. Later, it was in honor of his city that Rick would name the group he formed. As part of Carol City Cartel, he will begin touring his home state in the mid-90s. But all this will be just preparation for a more serious step.

He inherited his pseudonym from the famous drug lord Ricky Ross, who in the 80s-90s owned the largest cocaine traffic in the United States.

As the artist himself has repeatedly admitted, he was greatly influenced by the work of such artists as Ice Cube, The Notorious B.I.G, JT Money, 2Pac and Trick Daddy. It was thanks to the latter that Ross began his first serious steps on the big stage.

After Ross was signed to Slip-N-Slide Records, he began touring extensively with Trick Daddy, the label's main star at the time. In 2002, he was already on the Trina Diamond Princess album, and in 2005 - on Glamorest Life.
Everything changed in 2006 when he recorded Hustlin '.

Curiously, the beat for this track, made by The Runners, was originally suggested by T.I., who turned it down. After Ross heard it, he realized that it was with this track that he could shoot.
The bottom line was that after recording, he was literally showered with contract offers from such "monsters" as Murder Inc and Bad Boy, but in the end he made a favor in favor of Jay-Z and Def Jam.

The single, meanwhile, was storming the charts, and Ross was already preparing his debut album. A whole galaxy of top-ranked guests showed up at Port of Miami: Akon, Jay-Z, Young Jeezy, Lil 'Wayne, Mario Winans, Lloyd, Life Jennings ... The result was amazing sales and the status of the main opening of the year. Rick Ross instantly becomes a welcome guest on the tracks of artists of all stripes, from the same Trina in recession to the trendy Yung Joc.

This is how he spends 2007 and meets 2008. But we have to work further. So Ross opens the title of the second Trilla disc and releases the first Speedin 'single with R. Kelly on the chorus. The track is immediately remixed, where almost all the main stars of the summer took part, and the song slowly but surely rises in the charts.

The new album still does not contain a hit equal to Hustlin ', but the selection of celebrities on it again causes admiration. This is the already sore T-Pain, and the sweet-voiced Trey Songz, and the legendary Trick Daddy, and all the same top MCs Lil 'Wayne, Jay-Z and Young Jeezy. "Gold" status and excellent prerequisites for "platinum", that's what Rick Ross managed to achieve.

Now his career is not in danger: he consistently appears on hit singles, be it Nina Sky or DJ Khaled, and continues to gettin 'money.

Rick Ross is the best choice for your birthday party or any other corporate event! Fill in the application form on our website and enjoy the singer's performance!