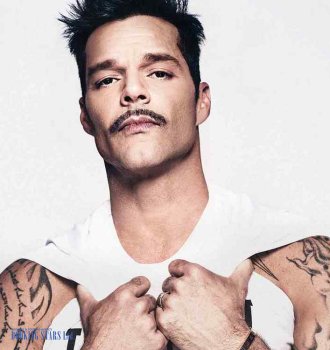 Ricky Martin was born on 24 December 1971 in San Juan, Puerto Rico. His full name is Enrique José Martín Morales. Enrique wanted to become an artist since childhood. When he was just 6 years old, he started singing for his family, using a big wooden spoon as a microphone. When Ricky became older, he did translation projects for a famous Latin band Menudo and several more popular bands, such as Led Zeppelin and Journey.

When Martin was nine, he started appearing in TV commercials. He worked on soda, fast food, and toothpaste advertisements. In just under two years, Martin appeared in 11 ads. However, he kept dreaming about a music career. Enrique often thought about his future as a big star in the music industry.

Martin auditioned to become a member of Menudo band twice. Both times, he was refused because of his insufficient height. In 1984, Ricky decided to go to the audition the third time. His insistence and patience impressed the project’s administration. Eventually, they allowed him to join the band. Ricky’s debut official song with Menudo was “Rayo de Luna”. It was featured in the LP, Evolucion (1984).

Martin often told his family members that he enjoyed working in a band. The work on the stage and constant touring were his dreams come true. However, the performance schedule was very tough. Ricky felt as if he didn’t have any free time. Several times, the singer tried to leave the band. However, the feeling of responsibility and the contract terms were getting in the way.

The band was very popular for several years. However, in 1987, the popularity started to wane. Two years later, Ricky, who was 17 at the time, decided to leave the band. During the five years he spent with Menudo, the group recorded 11 studio albums.

The singer decided to take a small break to understand what he wants from life. He came back home and finished high school. At 18, Martin moved to New York. However, he didn’t stay there for a long time. Shortly, he went to Mexico and got a part in the play Mama Ama el Rock.

In 1990, Ricky signed a contract with Sony Discos and released his debut LP, Ricky Martin in 1991. The album featured several popular songs. One of them, “Fuego Contra Fuego”, earned several gold certifications.

In 1993, the singer released another LP, Me Amaras. Martin’s producer called the album “good work” but also thought it to be unnatural. The record didn’t make it into the charts. Later, it sold 700,000 copies worldwide.

In 1994, Ricky moved to Los Angeles and landed a role in the sitcom, Getting By. When the series stopped airing, the singer was invited into another project. However, after some time, Martin decided to focus on his singing career.

In 1995, Martin released his third LP, A Medio Vivir, which sold over 3 million copies worldwide. After the release, he started touring the world. Many fans wanted to book Ricky Martin for their events.

In 1998, Ricky recorded another successful album, Vuelve. The same year he presented a single “La Copa de la Vida” for FIFA. The song became very popular and earned platinum and gold certifications all over the world. Vuelve sold over 9 million copies and brought Ricky a Grammy nomination.

In 1999, Ricky decided to start recording songs in English. His next LP, Ricky Martin topped numerous world charts and sold over 7 million copies worldwide. The song "Livin' la Vida Loca", featured in the LP, became the singer’s calling card, conquered the charts, and earned numerous platinum statuses. After the release, Martin started alternating English and Latin albums, all of which were successful.

Martin took a break from the music career between 2007 and 2010 for personal reasons. Upon returning, he recorded a new LP Música + Alma + Sexo (2011), which reached high spots on the charts but was less commercially successful than his previous work.

In 2015, Martin recorded his 10th studio LP, A Quien Quiera Escuchar, which went platinum in the USA.

The singer continues working on his music and acting career and touring the world.