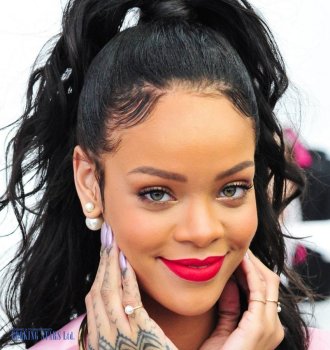 Rihanna is one of the most popular artists of the 21st century. She has 18 Billboard Music Awards, 8 Grammy Awards, 6 American Music Awards, and a prestigious Icon Award. All of her albums have platinum and gold statuses.

The future celebrity was born on 20 February 1988 in Barbados. Her mother was an accountant while her dad was a warehouse worker. The singer has two younger brothers. The family had financial troubles and had to live in a small apartment. Rihanna attended a local school. She enjoyed music since high school and was a big fan of reggae. When the girl got a little older, she got a job at a nearby store.

When Rihanna was young, her father started using drugs. Due to that, parents had frequent fights and eventually divorced. Rihanna loved her father and had a tough time accepting the divorce and his drug addiction. She started having strong headaches. At some point, the doctors suspected a brain tumor, but thankfully, the diagnosis wasn’t confirmed.

Rihanna’s peers often laughed at her due to her skin color, which was lighter than usual. In her interviews, the singer said that even though it was painful at the time, she is grateful to those people for toughening her up.

When Rihanna was just seven years old, she began singing for her family. Her talent was hard to overlook. The girl won a local contest by singing one of Mariah Carey’s songs. The victory helped Rihanna become confident about her talents, and she continued working on her singing skills. When she was 15, the teenager and two of her school friends formed a band.

After some time, the talented singer was noticed by a successful producer Evan Rogers, who was part of the Sturken and Rogers production team. The producer was so sure that Rihanna was bound to become a celebrity that he recommended to she and her mother to move to the USA.

After the move, Rihanna recorded several demo singles, one of which was “Pon de Replay". Later, the song became the artist’s first big hit. In 2005, the singer released a debut LP, Music of the Sun, which earned a gold status in the USA and became platinum in Canada. Inspired by the success, less than a year later, the artist presented a new LP, A Girl like Me. The producers were Rogers and Sturken. The album became very successful, reaching the 9th spot of Billboard 200 and selling more than 4 million copies worldwide.

The single “SOS”, featured in the second LP, topped Billboard Hot 100. To support the first two albums, the singer embarked on a tour of the USA and then traveled to the UK with Pussycat Dolls. The tour continued for three months.

In 2006, Rihanna debuted as an actress. She got a small part in a teenage comedy, Bring It On: All or Nothing. She also wrote a soundtrack for the movie.

Next year, the singer started working on a new LP. Good Girl Gone Bad became popular all over the world and sold more than 9 million copies. Many fans wanted to book Rihanna for private events.

In 2009, the singer presented a new album, Rated R, which was called the best album of the year. Rihanna continued conquering charts all over the world. The album came in third on Billboard 200 and became platinum, selling more than a million copies in the USA and 3 million worldwide.

While recording new albums and reaching new heights in the music industry, Rihanna found time to work on her acting career. In 2012, she got a part of a petty officer in the movie Battleship. She liked being on the big screen and was always open to new offers.

In 2015, together with Paul McCartney and Kanye West, Rihanna recorded a new hit, "FourFiveSeconds", which earned numerous platinum certifications all over the world.

In 2017, Rihanna showed her designing skills. She presented a sports clothing line, Fenty x Puma. The same year she appeared on the stage at the award ceremony for Louis Vuitton and shocked her fans with a new image. The singer gained more than 15 kg. There were rumors that Rihanna was pregnant. However, she never confirmed them.

In 2019, Rihanna appeared in a music film, Guava Island. She got a leading role.

Even though Rihanna is a successful actress, she spends the majority of her time on the music career. She continues recording new hits and performing live.

How much does it cost to book Rihanna:
Price inquiry
Rihanna booking agent:
Contact agent
Rihanna Contacts:
Send Rihanna a message
« previous next »