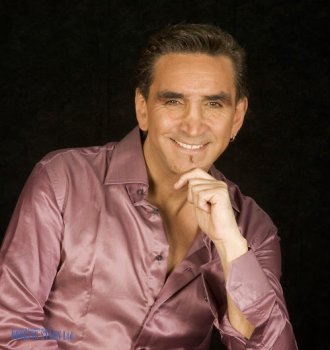 Roby began his career playing in romans rock groups, he was artistically born in 1981 as a part of group called "Livimgstone". He started as a singer in 1983. Since then 1984 to 1988 he made four singles and he did tours in Italy and in Europe. His first real international work was a song called "I can't change your life" that took a part of few European compilations that appened in 1991 ( the director of the video, of this song it is Derek Hallow who directed the first Madonna's video as whell). In 1992-1993 he realized in London and Liverpool his first album called "MIDNIGHT". In this work a few english musicians joined Roby, the guitar player: Martin Habramams; keyboard player: Jhonny Joules; chorus singers: Carole Cook and Kathie Humble (famous for their collaborations with: Grace Jones-Frankie goes to Hollywood-Art of Noise- Spandau Ballet and the Raf).The album was distributed by W.E.A. Three videoclips were done out of this Proyect.

1996 he started to compose some songs for important Italian artists. In this mean while he made his second album dedicated to UNICEF and to the Peace in the World. Two world famous artists worked on the project: Franco Nero, famous Italian actor that together with Roby has made a brillant duet in the tune called " Insciallah ". The second famous artist that has collaborated with Roby it is the Oscar winner: Vittorio Storaro that directed the videoclip of this song. In 1998 the Roby's song title "Yo te quiero amor" was inserted in a Brazil compilation and distribuited by"Velas record do Brazil".

2000 At this time, he made the album in Spanish, Title: Alma Latina Destinated to South American and Asia. This CD, is a mix of Melodical-Rock and Mediterranean Rhytms. Of this CD, he made Two Singles italian version, destinated for all Europe. In July 2000, he has partecipated to XI the edition of the festival in Asia: “ Voice of Asia 2000 “ in Kazakhstan, achievend succes of the people he the top of the list of the: Running Alternative Ranking of the contest. Guest Star togheter Franco Nero, In many International Television.

2001 he has partecipated to X the edition : “Discovery international festival”, in Bulgaria (Varna), Special Award of the Jury . In September is was Guest Star in the BNT television in Sofia. The song included in this Compilation.

2002 Partecipated of the international Festival : “UNIVERSETALENT”, in Praga with the song : Innamorarsi. The song included in this compilation

2003: At this time he made the Single, is a mix of Dance-Mediterranean rhitms. From the 2-5th July partecipated of the “ International Pop Music Festival Sunflower “ In Serbia-Montenegro (Zrenjanin). The song included in this Compilation.

2003:From the 12- 17th July He Has Partecipated in Belarus ( Vitebsk-Gomel-Minsk ) Guest Star of the “XII International Festival of Arts Slavianski Bazaar ". transmitted in the C.S.I (Belarus Tv - Russia Tv - Ukraine Tv ) Roby Has Obteined a Shocking succes with his Concert in Vitebsk and Gomel.

2004: From 25th to 27th March, represent the Italy to the prestigious festival "San Juan 2004 Second World Song Festival " who is carried out in Puerto Rico (Caraibbeanses). An International event trasmitted in rel time Tv in 52 countries of Central America, Suth America and Caraibbeanses.

2005/06: He is now the classic “Nemo Propheta in Patria”. An artist who is gaining good success in several countries around the world. He is often called to represent Italy by participating in the most prestigious international music festivals, by being invited as a guest in the major television network shows and by singing on various tours in central Asia. In the month of July he is invited as a guest in the RAI show “Uno Mattina”.

2007 : At this time, he made the CD-Title : CUORE ITALIANO, distribuited in Germany and Northern Europe by Morell Record / CMS-SONY DADC (www.morell-music.de ) and in digital distribution in the World by portals like i-tunes, napster, cd baby, etc.... By Wespo.

2008/09 : In the month of September was published in Germany the Compilation “Welcome to Europe” featuring the song El Viento Sopla sung by Roby together with actor Franco Nero. The album is under the sponsorship of the German Cultural Good State Office. Roby has been guest, in August, of the radio show “Notturno Italiano”, broadcasted all over the world by Rai International. 2009 : It is a very important year for Roby, having signed a very important contract with the music agency “Event Management” of Saint Petersburg. The new tour has been previewed at the Grand Hotel Europa in Saint Petersburg, obtaining a huge success. The show will tour in the major Live Music : XXXX the Bar (three Concert), Oky Park ( New Year's Day 2010), Live Music Martini (Two Concert).

Festival Mamaia 2009: Since August 20th until August 25th Roby is near the Black Sea (Constanza, Romania), as the guest of honour of the international Festival “Mamaia 2009” where he has sung two songs and performed in a duo with world famous showgirl Ramona Badescu. The show has been broadcasted on-line by the Nation

2010/11 The new CD “Italian Evergreen ” distributed all over the world in digital format in the estores owned by Zimbalam-Believe Digital, the British record label specializing in on-line music file distribution.

2013/2014 : It is also under development another single titled “Saremo Liberi (Wir werden frei sein)” which will be launched in Germany where Roby will sing together with German singer Michaela Christ. It will be a duet sung in both German and Italian. 2015 : A the present time is in preparation a New Single - Album By Starproductions(Switzerland) and a Promotional Tour in Germany,Switzerland,Austria,Belgium,Holland

From 5th to 13th January 2015 was in Punta Cana (Santo Domingo) for many concert in the residence of the President “ Atlantiks-City “ Mr. Vladimir.