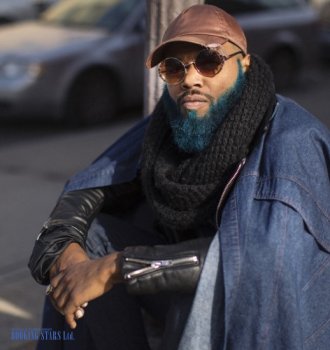 Rome Fortune’s full name is Jerome Fortune. He decided to shorten the name to make it sound more suitable for the rap world. However, some fans say that the name reminded rapper of the sitcom Martin, where Jerome was a pimp. That’s why the artist decided to cut the name a bit.

The artist was born on 13 October 1988 in Philadelphia, Pennsylvania. Fortune had many musicians in the family, which helped him discover his talent rather early. Jerome’s relatives were cornetist Nat Adderley and Cannonball Adderley, who played the saxophone. His grandfather Richard Adderley was a jazz musician, whose work influenced Fortune.

In his songs, Rome Fortune mixes at least six different styles. In the interviews, he often said that he tried to read a lot in order to improve the quality of his lyrics. It’s worth noting that Jerome didn’t get any help from relatives or friends when starting his career. He managed to find lyrics and music, which were interesting to the audience, on his own.

In 2011, Rome released his debut EP, The Air Mattress. In 2012, he presented two more albums, ЕР V O Y E U R (produced by the rapper Childish Major) and mixtape lolo, recorded together with CeeJ. The mixtape featured such songs as “Quest”, “Zoner”, “Cocaine Present”, “95 Skydive”, “Pure Game, Glass Of Wine & A Blunt”. Even though the albums didn’t make it into the charts, the rapper managed to find his audience.

In 2013, the rapper released a new mixtape, Beautiful Pimp, which brought him even more popularity. The single “OneDay” became a hit. Beside this song, the fans gave high scores to “Money Ministries”, “Get the Guap”, “Ice Cream Man”, “Balcony”, and “Letter Loose.” During that time, many fans tried to book Rome Fortune for their private events.

The year 2014 was busy for the artist. He released several EPs, Beautiful Pimp II, Drive, Thighs, & Lie, and a mixtape Small VVorld. In the summer, together with an indie-rock band, Glass Animals, the singer went on an American and the UK tour.

In 2015, Rome released yet another EP, YEP, recorded with OG Maco. He also worked on a new mixtape loloU, recorded with CeeJ, and helped Sevadliza with the album Men of Glass. The same year, Fortune went on a North American tour with Iamsu!

In 2016, the artist presented the long-awaited LP, Jerome Raheem Fortune, recorded with Fool’s Gold Records. The singer signed a contract with the label a year earlier. The LP was produced by Kaytranada. It featured such popular songs as “All The Way”, “Blicka Blicka”, “What Can You Do”, “Heavy As Feathers”, and “Dance.” However, the album didn’t manage to conquer the charts or become financially successful.

While recording his songs, Rome performed with other artists. He was invited to work on What So Not’s album, Buried.

In 2016, Fortune released a new mixtape, VVORLDVVIDE PIMPSATION. It featured such singles as “SEAVVORLD”, “My First $100,000”, “NINa9”, “Trouble”, and “Lit Freestyle.” The guests of the album were rappers Mims, NBHD, Nessly, Wara, Nevabitch, and ILoveMakonnen.

Music critics note a special approach that Jerome takes to writing songs. He mixes African motifs with jazz and the sound of rap hits of the 1990’s. Fortune often talks about the 90’s rap hits in his interviews.

The rapper has big plans for the future. He works non-stop and has little time for friends and family. Rome is moving toward perfection by recording new songs and performing live.