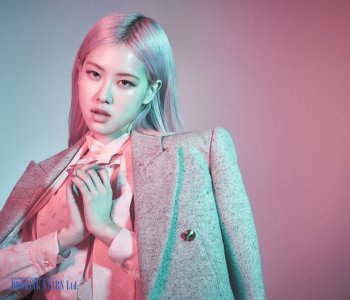 Rosé (로제) is a Korean-Australian singer under YG Entertainment. She is the main vocalist of the girl group BLACKPINK.

She made her solo debut on March 12, 2021 with her first single album, "R".
She was revealed as the fourth and final member of BLACKPINK on June 22, 2016. The group made their debut on August 8 with their first digital single album "Square One".

In October 2018, YG Entertainment announced that all BLACKPINK members would get the chance to make a solo debut, starting with Jennie, and then Rosé, Lisa and Jisoo. However, only Jennie debuted that time and there was no updates on this statement.

On May 31, 2020, the agency made another announcement regarding their activities. It was announced that Rosé's solo debut is planned to be in September after the release of BLACKPINK's first studio album, with multiple songs in an album format.

On December 30, 2020, it was revealed that filming for Rosé's solo debut music video will happen in mid-January 2021.

2021: Solo debut
On January 25, 2021, YG Entertainment officially confirmed that Rosé would premiere her solo song at BLACKPINK: The Show with its first performance. At this concert, she performed "Gone", a song that YG Entertainment described as a "sub-title track". They also showed the MV for Gone at ,,THE SHOW".

On February 10, it was revealed Rosé will make her official solo debut sometime in March. On the midnight of March 2, teaser posters were released and confirmed the date to be March 12.