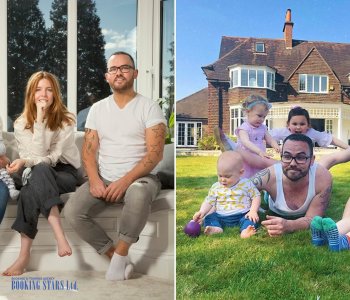 SACCONEJOLYs (formerly LeFloofTV), is an American-Irish YouTube channel that focuses on the daily life of an Irish family. In 2014, the family moved to Surrey, England.

STARRING: Jonathan, Anna, Emilia, Eduardo, Baby "Giulietta/Luca" Squid, Alessia, Andrea, Albi, Sina, Nivea, Nuvola, Bianca, Theo + Minnie.  When Jonathan Joly married Anna Saccone they both decided that instead of Anna dropping her family name they would both take each other's names and join them together. They choose to use SACCONEJOLY rather than JOLYSACCONE simply because it sounded better.

Jonathan and Anna Saccone-Joly have four children, Emilia, Eduardo, Alessia and Andrea. They also have six Maltese dogs, Albi, Sina, and their four puppies: Theo, Bianca, Nivea and Nuvola. Another puppy born was called Minnie but she sadly died three weeks after her birth.

Jonathan was born in Dublin, Ireland and Anna was born in Baltimore, Maryland, United States. Emilia and Eduardo were both born in Cork, Ireland, where the family resided until the Summer of 2014 when they moved to London, where Alessia was born.

Anna and Jonathan announced on April 15, 2016, that they were expecting their third baby. However, in May, Anna suffered a miscarriage before the gender of the baby was ascertained. They affectionately named their lost baby "Squid", and Jonathan has a tattoo of a squid on his left hand, to immortalize Squid's memory. On August 27, 2018, they posted a video explained their children's names and revealed that Squid's name would have been Giulietta or Luca.

On February 4, 2018, they announced that they are expecting their fourth child, a baby boy named Andrea, who was born on August 15, 2018.

Jonathan Patrick Christopher Joly (born: February 13, 1980 [age 41]) is the husband of Anna and the father of Emilia, Eduardo, Alessia and Andrea. He was born in Ireland. When he first joined YouTube, his channel was used for comedy videos. He has three siblings named Ruth, Simon and Leah. Jonathan also has a personal channel called jonathanjoly.

Anna Brigitte Saccone (born: November 3, 1987 [age 33]) is the wife to Jonathan and mother to Emilia, Eduardo, Alessia and Andrea. She was born in Baltimore, Maryland. She studied at St. Angela's College and University College Cork in Ireland. She also has a personal channel called Anna Saccone where she discusses beauty, diet, fashion, baking, and more. She ended up moving to Cork, Ireland to live with her husband.

Emilia Tommasina Saccone-Joly (born: September 11, 2012 [age 8]) is the oldest daughter to Jonathan & Anna and older sister to Eduardo, Alessia and Andrea. She is now a bright and bubbly 5 and a half year old who loves princesses, playing with her brother and parents and looking after her baby sister. Emilia is named after Anna and Jonathan's wedding planner. It was the first time that they heard the name and they really liked it. Tommasina is Anna's maternal grandmother's name.

Eduardo Jonathan Saccone-Joly (born: April 9, 2014 [age 7]) is the son to Jonathan & Anna, and the younger brother to Emilia and older brother to Alessia and Andrea. Now almost three, Eduardo has a fun and mischevious personality. He loves playing with his family. Eduardo is named after Anna's late father and they had always planned on using that name is they had a son. His middle name is after his own father.

Alessia Francesca Saccone-Joly (born: March 30, 2017 [age 4]) is the second daughter to Jonathan and Anna, younger sister to Emilia and Eduardo and the older sister of Andrea. They announced on September 10, 2016, that they were expecting another child. They didn't immediately inform the viewers of this pregnancy, due to their previous pregnancy's complications, having found out in early July themselves. However, in their second trimester, they were assured by the OB/GYN that everything was going smoothly and felt more at ease and ready to share the exciting news. On September 16, 2016, they revealed the gender - a girl - and she was born on March 30, 2017. Alessia isn't named after anyone, but both Anna and Jonathan really liked the name. Her middle name, Francesca, she got from one of Jonathan's good friends and businesspartner.

Andrea Luca Saccone-Joly (born: August 15, 2018 [age 2]) is the second son to Jonathan and Anna, and younger brother to Emilia, Eduardo and Alessia. On February 4, 2018, they announced that they are expecting their fourth child, due on August 8, 2018. On February 6, 2018, they revealed the gender - a boy. The possibility of Anna being pregnant with him was hinted in the vlog titles and on twitter via Jonathan. He was born on August 15, 2018. They revealed his name in the video posted on August 18, 2018. Andrea is named after Anna's cousin. They both really liked the name Luca (also chosen for Squid if it had been a boy) and chose that as his middle name.

When Jonathan and Anna first started doing videos, they didn't have a schedule. They started doing daily vlogs as a test and they are now at their eighth year.

They have vlogged all of their big life moments, including the births of all four of their children.

The couple have their shared vlogging channel, as well as their own individual channels and a fourth channel for the kids (Friendliest Friends).They are also very active on Snapchat and Instagram.

During a livestream (November 26th 2016) They announced they'd only be updating during week (Monday-Friday) due to projects. Jonathan tweeted they'd still Vlog but it won't go up until Monday.