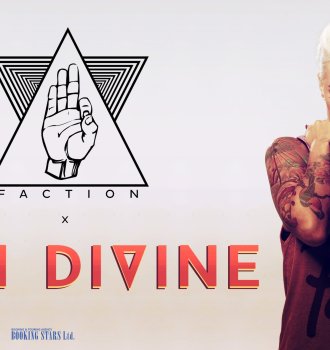 Long associated with the legendary Defected Records, Sam Divine has come a long way since being a record shop employee having spent the last seven years being a key component to the White Isle’s party scene. Her travels have seen her tour throughout Europe as well as Brazil, Chile, Japan and Dominican Republic, with festival highlights including We Are FSTVL (UK) and Pacha Festival (The Netherlands) as well as securing a three year residency at Ushuaia, Ibiza. Without doubt one of the most popular and passionate DJs on the circuit, Sam Divine is a guaranteed floor-filler and party starter.

Divine’s DJ career initially kicked off when she won a DJ competition in Bristol which led to a club residency. Massively in to her soulful house she began working in record shops such as Chemical Records as a house buyer where she gained most of her music and industry knowledge. It was these moments where she realised her life and house music were inseparable. ‘The warehouse was underneath the offices’ she explains, ‘so I used to spend hours down there rummaging through the vinyls on my lunch break’.

After her first season in Ibiza during 2005 Sam decided to move to London, back then the heart of the country’s soulful house, in what she deems as the most important decision in her career. The following year she touched back down in Ibiza, her home for many summers to come, having earned her residencies at many of the islands hotspots.

It was in 2009 when Sam Divine was signed to Defected’s artist management where she then began warming up every week at Mambo for house legends such as Kenny Dope and Frankie Knuckles and also had her own weekly Defected show on Ibiza global radio. It wasn’t long before Divine transformed into an international sensation, playing all around the world in many of its greatest venues.

This year marks her third residency at Ushuaia in Ibiza and now with over a decade of DJ experience she still praises her favourite party as being the Defected Opening Party at Ushuaia in 2011. ‘I’ve always supported Defected, it’s been my sound from day one and I’m so honored and grateful to be part of the House music legacy they’ve created.’

Divine’s sets are a blend of Deep ,Vocal and Balearic house and with a solid experienced understanding of the entire house genre guarantees tasteful and exciting performances and this year sees her playing alongside Sandy Rivera, Noir, Dennis Ferrer, Joris Voorn, Pirupa, Flashmob, Supernova, Maxxi Soundsystem, Osunlade, David Morales, Dimitri From Paris, Copyright and many more.

In addition to a booming DJ career, Sam is also an ambassador for Breast Cancer Research thanks to her annual charity night La Vita of which 25 female DJs helped to launch. This year marks La Vita’s 7th birthday in Ibiza and London, and so far its success has helped to raise over £32,000.

In an industry where many artists are praised for their efforts and determination Sam Divine shines brightly as a true example of diligence. She is the personification of someone who genuinely possesses such traits and this is evident in her countless achievements in such a short time span. Her unrivalled work ethic is displayed through her animated and dexterous DJ sets of which continue to build her an ever growing loyal fan base. She is in our eyes an icon for inspiration of what you can achieve if you pour your heart into something you adore.