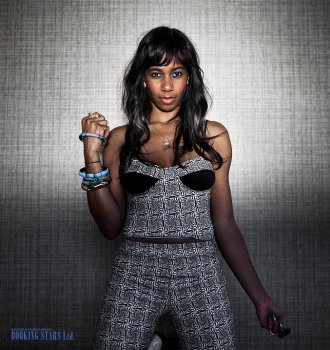 Santigold is a pseudonym used by the singer, songwriter, and producer Santi White. She was born on 25 September 1976. The singer attended high school in Philadelphia. Upon graduating, she enrolled in college at Wesleyan University and majored in music and African American studies. Eventually, she turned her entire attention to music.

Santi’s first pseudonym was Santogold. It was a nickname given to the teenager by her friends in the 1990s. At first, the young woman worked at Epic Records. Her responsibilities included searching for new talent. Santi left the company when she got an opportunity to write and produce songs for the indie-pop singer Res. White helped her with the album, How I Do.

At the beginning of her music career, Santi worked with a punk group Stiffed. Together, in 2003, they released an EP, Sex Sells. In 2005, the band presented an LP, Burned Again. After the release, Lizard King Label offered a singer a solo contract. Soon she recorded her first solo singles, "L.E.S. Artistes" and "Creator". Both of them managed to become popular online. The first one reached the 27th spot of the UK Albums Chart.

In the spring of 2008, Santi presented her debut album, Santogold, which was recorded with many other musicians. The critics from Entertainment Weekly and Spin gave the LP positive reviews. The Rolling Stone Magazine put "L.E.S. Artistes" on the second spot of its best song of the year list. The album came in second on Top Dance/Electronic Albums and appeared on the 74th position of Billboard 200.

In the summer, together with DJ Diplo, the singer recorded a mixtape, Top Ranking: A Diplo Dub, which earned excellent reviews from the NME and Pitchfork critics. To support her songs, Santi went on a tour with Bjork and M.I.A.

The same year, the singer worked as an opening act for Coldplay and went on Goldrush Tour. She performed at the concerts of such celebrities as Jay-Z, Kanye West, and Beastie Boys. Many fans tried to book Santigold for private events.

In 2009, White had to change her pseudonym from Santogold to Santigold in order to avoid a lawsuit from a film producer Santo Rigatuso. In the summer, the singer performed at Lollapalooza Festival. Before leaving the stage, White announced her plans to release a new album.

In 2011, Santi presented a new song ‘Go!”, recorded with Karen O from Yeah Yeah Yeahs. It was a big hit. The artist’s next album, Master of My Make-Believe, came out in the spring of 2012. The lead single “Big Mouth” was available for free downloading at the singer’s official website. It didn’t make it into the charts. However, the second single "Disparate Youth" was a hit in the USA, UK, and Europe.

In 2012, Santi was invited by a famous Mali duo Amadou & Mariam to record their album, Folila.

In 2015, Santigold released a soundtrack “Radio” to the movie Paper Towns. In November, she presented a single for the third LP, 99 ¢. The song called "Can't Get Enough of Myself" became a hit in Belgium. The album came out in 2016. The same year, Santi released an interactive music video for the song. The viewers could insert their images into the video.

The second single "Who Be Lovin Me" was recorded with the assistance of a popular rapper iLoveMakonnen. The release of 99 ¢ was supported by Atlantic Records. The Mojo Magazine gave it four stars out of five. In March 2016, the singer embarked on the tour of the USA to support the album.

In 2018, Santigold presented a new mixtape, I Don't Want: The Gold Fire Sessions. White said that Afro Caribbean music inspired her to record it. The project was completed with the assistance of a musician and producer Dre Skull.