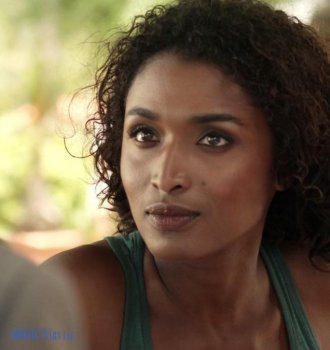 Sara Martins was born on 19 August 1977 in a Portuguese city Faro. Sara’s family moved to France when she was just 3 years old. Martins speaks Portuguese, English, and French fluently.

Even though the young woman dreamed of acting ever since childhood, she decided to go to a law school. After graduating Martins studied in a theater college and then attended French National Academy of Dramatic Arts.

Martins debuted on television in 2001. She landed a small role in the French series Police District. While studying at the academy, the young women played a few small roles on French television.

The fame came to Martins in 2011, when the British channel BBC One offered her a starring role in the series Death in Paradise. It was Sara’s debut in comedy and her first gig on British television.

Martins portrayed Camille Bordey – an ex-undercover investigator, who got a job in the local police after her future partner accidently blew her cover during an arrest. Martins worked in the series for four years. In 2015, the character was written out of the script.

In 2015, after leaving Death In Paradise, Martins received a small role in the American series American Odyssey. Her character’s name was Serena. The same year she was invited to play a secondary role in the French TV series The Law of Alexandre.

For some time, Martins didn’t appear on television. After Death in Paradise, she was having trouble getting good roles. Even though the critics gave Sara’s performance good reviews, filmmakers weren’t in a hurry to give her another chance.

In 2017, Sara landed a small role in the French TV series Capitaine Marleau, where she portrayed Irene Ruff.

Martins continues looking for good roles and hopes to find fame in the nearest future.