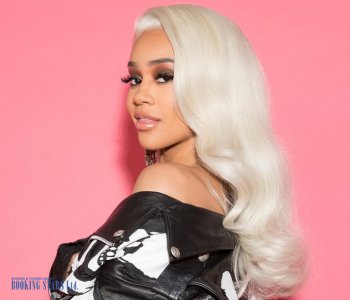 Saweetie - A singer, rapper, songwriter, business specialist and just a beautiful girl - it's all about her, about Diimonty Harper, better known under the pseudonym Saweetie. The debut single "Icy girl" and the music video for it opened a window to the world of popularity for her and brought her first contract with a recording studio.

Daimonty Harper was born into a multinational family: her mother is of Filipino and Chinese roots, her father is African American. She grew up in California and often spent time on the San Francisco Peninsula. She graduated from Monterey Trail High School, and then from the University of San Diego, majoring in communication and business.

But a musical career has always attracted Saweetie more than an office job, because from the age of 14 she began to write music and songs. In addition, she wanted to prove that rap is not only for men. Therefore, after graduating from university, the girl decided to focus on her hip-hop career. And she was right.

Saweetie started uploading her rap art back in 2016 on Instagram. These were rather short videos, but one of them, where she put a rap on the song "My neck, my back" by the American singer Khia, formed the basis of her debut single "Icy Girl". Repersha posted this track in the summer of 2017 on the SoundCloud platform, and in October she presented a video clip, which immediately went viral and in the first 3 weeks gained 3 million views, and as of August 2019, almost 80 million. She then presented the track "High Mantenanse", which also quickly became popular on both Instagram and Twitter.

At the moment, the girl has been in a relationship with the American rapper Quavo, the star of the Migos group, for almost a year and a half. The romance began on the set of the video, where Saweetie played his mistress. There were even rumors on the network about their possible engagement, but apparently, it is too early to talk about it. Saweetie has no children.

The girl has dual citizenship

Saweetie's cousin is a producer who also helped with the release of several singles.

According to the singer herself, the work of Niki Minaj had a greater influence on her.