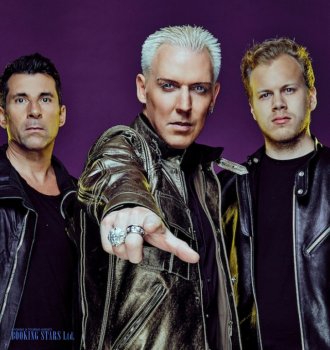 The band Scooter appeared in Germany in 1988 when two friends H.P. Baxxter and Rick Jordan decided to form a project called Celebrate The Nun. It became fairly successful. Some of the group’s songs even made it into the American charts.

Baxxter attended a prestigious college but quit his studies to work with the band. He decided to devote his entire life to music. The band’s work was noticed by a successful producer, Axel Henninger. He helped the group record its debut album, Meanwhile. It earned positive reviews from the critics and fans. Two years later, the group presented a new album, Continuous.

After the release of the second album, the Billboard Magazine wrote a praising article about the group. At the same time, musicians decided to change the name to The Loop and invite new members. Soon Jens Thele and Ferris Bueller joined the band.

Musicians spent the majority of their time recording remixes. They were inspired by the work of such celebrities as Marky Mark, Toni Di Bart, and Tag Team. Until 1993, artists were honing their skills and waiting for a good label to make them an offer.

In 1993, musicians got an offer to create a new version of the Dutch hit, "Vallee Des Larmes". While working on the song, the artists decided to change the name once again. That’s how Scooter was born. Jens Tehle became the band’s manager.

In 1995, Scooter signed a contract with the label, Club Tools. Soon they released a debut album, ...And The Beat Goes On!, which quickly became popular and sold thousands of copies. It’s worth noting that the album hasn’t lost its popularity for many years. At that time, many organizers tried to book Scooter for private events.

While on the peak of its popularity, the band presented several new singles. The most popular ones were "Hyper! Hyper!", “Faster Harder Scooter”, and "Endless Summer". The songs became huge hits. They were most appreciated by the younger generation.

Meanwhile, some critics didn’t like that artists use songs recorded by other groups. Scooter worked with Billy Idol’s and Kiss’s content. However, the band’s fans appreciated the fact that the band gave many songs a brand new life. For example, the group managed to revive a hit of the 70s “Rebel Yell”. The old hits were arranged in a new way and got a new chance at popularity. This helped Scooter win the hearts of new fans.

In 1998, the band released its fifth LP, Rough And Tough And Dangerous The Singles 94-98, which featured the legendary hit “No Fate”. At about the same time, the talented keyboardist Ferris Bueller left the band. The leave was unexpected for many. The artist decided to pursue a solo career and managed to become successful. Soon after the leave, he recorded a popular single “Girl”.

Many fans were sure that it would be impossible to replace Bueller. However, artists quickly found Axel Coon, who wasn’t just a keyboardist but a composer, a DJ, and a producer. With his assistance, Scooter presented a new album, No Time To Chill.

Since the beginning of the group’s career, Scooter recorded 19 studio albums and more than 60 singles, many of which managed to make it into the top-20 of charts all over the world. The musicians were developing new skills all the time. They came up with new ideas and honed their talents. Sometimes, the band would record more than one album a year. For example, in September 1999, musicians presented Back To The Heavyweight Jam. In June 2000, they released Sheffield. Both albums were very successful.

In 2017, the band released the latest album to date, Scooter Forever. It reached the 8th spot on the national German Chart.

Scooter continues performing live all over the world. Today, Jens Thele and H.P. Baxxter are the only remaining members from the initial lineup. However, it doesn’t keep the band from gathering full concert halls and acquiring new fans.