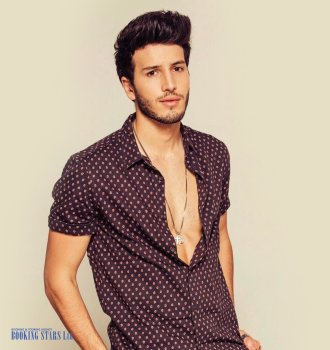 Sebastian Yatra was born in Medellin, Columbia on 15 October 1994. His parents worked in the music industry. In 1999, Yatra’s family moved to Miami, Florida. By that time, Sebastian was already taking music lessons. He continued studying in the USA and getting his first roles in local musicals.

When Yatra turned 12, he started writing his own songs. Even though for some time, he dreamed of becoming a soccer player, music upstaged sport and became a passion of his life. When Yatra was still a teenager, he was making plans to create his own band.

In 2013, Yatra recorded his first single “El Psicologico.” The song was released in the USA, Columbia, Venezuela, and Ecuador. A few weeks after the release, the single reached the 3rd spot in the Columbian chart and the first spot in Venezuela and Ecuador. The music video, which was recorded on a Malibu beach, made it to the majority of music channels in Latin America. After the song was released, Yatra went on a tour with Paty Canty and Sandoval Sandoval. The popularity of the single coupled with the success of the tour made the singer truly famous. It was nearly impossible to book Sebastian Yatra for a private event.

The amazing success allowed Yatra to continue recording songs. Even though the next single wasn’t as successful as the first one, his third song “Para Olvidar” became a bit hit in Columbia, Ecuador, Venezuela, and the USA.

In 2015, Yatra started working with such famous Columbian artists as Juan David Gálvez from Alkilados и Mike Bahía, who helped him record a new hit “No Me Llames”. The song was very popular in the USA and Latin America. The same year, Yatra worked with Cali & El Dandee and Juan Magan to record “Por Fin Te Encomtre”. The single topped the Spanish chart and received five platinum certifications. The music video was recorded on Ibiza and collected more than a million views in just 3 days.

In 2016, Yatra signed a deal with Universal Music Latino and released “Traicionera”. It was one of the leading singles later included in the Extended Play Yatra (2017). The song was overwhelmingly successful. It topped Columbian and Spanish charts and reached the 23rd spot of Billboard Hot Latin Songs. It also earned a diamond status in Mexico. The song has more than 10 platinum certificates. After the release of the single, Yatra went on a tour to Portugal, where he visited seven cities.

Sebastian’s next single “Alguien Robó” was slightly less popular than the previous one, but it still earned several platinum certificates and reached high spots on Latin charts. Extended Play Yatra (2017) received four platinum certificates in Columbia, three in Ecuador and one golden status in Venezuela.

In 2017, Yatra recorded a single with a famous Columbian singer Carlos Vives. “Robarte un Beso” reached the top spot of the Columbian chart and received a platinum certificate.  The same year, Yatra worked with many different artists. He recorded “Suena el Dembow” with Joey Montana and “Sutra” with Dalmata. Both songs received golden certificates and the former went platinum.

Yatra continues working on his career and performs live.