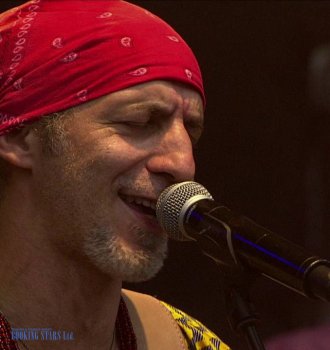 Bruno Garcia (pseudonym Sergent Garcia) was born in 1964 in a small French town near the border with Switzerland. His father was a Spanish-born Basque and his mom was from France. Bruno spent his early childhood in a small Spanish city, Bilbao. When he turned five, his family moved to Paris.

Even though none of his family members were serious music fans, it was a big part of the young boy’s life. His parents had a substantial disc collection, which included albums from Latin, African, Spanish, and French artists. When Garcia turned 14, he started learning how to play guitar. A little later, he joined a teenage rock group formed by one of his friends. Bruno’s idols at that time were Bob Marley, Joe Strummer, and Bob Dylan.

In 1984, Garcia established his own band Ludwig von 88. The group was very popular in France among alternative rock and punk fans. The band released 10 albums and stayed together for almost thirteen years.

In the 1990’s, Bruno favored a mix of hip-hop, Arabic, and Latin music called “metis music”. He started DJing and learned Jamaican rhythms. At that time, Bruno came up with a pseudonym Sergent Garcia. He took the name from the movie of his childhood Zorro. Garcia started discovering different Latin music styles, from cumbia and bomba to plena and Cuban music. In the middle of the 1990’s, Garcia travelled to Cuba and the trip changed his life. He finally found the style he was looking for.

In 1996, Garcia released his first official single “Salsamania”. Later that year, he recorded his debut studio album Viva el Sergento. The French audience got a chance to enjoy a mix of styles from salsa and reggae to hip-hop. Garcia was invited to a Latin music festival so he hired local musicians to create a band.

In 1999, Bruno recorded Un poquito quema'o. The LP became very famous, taking the artist to a new level of popularity. It was becoming tougher and tougher to book Sergent Garcia for any event.

In 2003, Bruno went to Jamaica and Cuba, where he created a new album La Semilla Escondida. The LP revealed the musical and cultural connection of these two places. After the album’s release, Garcia went on a long world tour.

Upon coming back, he recorded another LP Mascaras, which brought international street music to light. Bruno really enjoyed this style on his tour.

In 2005, Garcia went to Columbia, where he recorded a part of the EP Cumbiamuffin.  The rest of the songs were recorded in other countries so the album only came out in 2009.

In 2011, Garcia released Una y Otra Vez. For the first time in many years, he switched the label from EMI to an American-based Cumbancha.