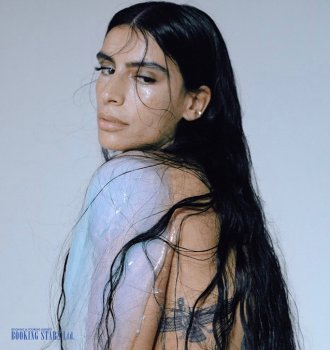 Sevdaliza was born on 1 September 1987 in Tehran, Iran. Her real name is Sevda Alizadeh. When the girl was five years old, her parents moved to the Netherlands. There she began playing basketball professionally and even became part of the national team. Later, Sevda decided to study communications and earned a bachelor degree. The singer speaks five languages, including Dutch, French, English, Portuguese, and Persian. She writes songs in Dutch, English, and Persian.

In 2012, Sevdaliza recorded her first EP, Zwart Goud. It featured such popular songs as “Wapenfeiten”, “Zwarte Held”, ”Paradijs”, and “Verhalen”. The popularity came to the artist when she presented a music video for one of her singles “Clear Air” in March 2014. Even though, Sevda filmed at least three music video before that.

In 2013, Sevda was invited as a guest to record a song for the popular Dutch musician Subp Yao. The single “Thunderclap” was featured in his album, Bottles Poppin. The same year, she worked with the Dutch producer Boeboe on the song “Silly Boy”. The song appeared in the album, Buy Sell Bye Cell. A while later, Sevda presented music videos for the songs, "Race Against the Machine" and "Lions".

Sevdaliza continued climbing the ladder to success. In January 2015, the artist recorded her second EP, Suspended Kid. The most popular songs from the EP were "Sirens of the Caspian" and "Backseat Love". They conquered the local clubs and radio stations. At that time, many Dutch fans tried to book Sevdaliza for their events.

Later that year, the musician released her next EP, Children of Silk. It featured such popular songs as “The Inside”, “Men Of Glass”, “Amandine Insensible”, and “Marilyn Monroe”. The latter song was used for a music video, which came out in 2016 and turned out to be a hit. In 2015, Sevda released music videos for her songs, "That Other Girl" and "The Valley".

In 2016, Sevda decided to test her acting skills and appeared in a short film, The Formula. The psychological drama described the relationship between the family members after the loss of a child.

The same year, the singer recorded several popular songs for her alternative pop music fans. They were "The Formula", "The Language of Limbo", "Mad Woman", and "Human".

In 2017, Sevdaliza recorded her debut LP, ISON. She released it with her own label Twisted Elegance. The name for the album was chosen in honor of a comet. Sevda called it bright, beautiful but independent and unreachable. The LP didn’t become commercially successful or popular nationwide. The reason probably lies in the lyrics, which were far from what was demanded at the time. The singer talks about controversial subjects, trying to get beyond dependency on social laws. In her interviews, Sevda often says that she writes songs for people, who want to free themselves from stereotypes and public opinion. The singles "Shahmaran", "Hubris", "Scarlette", "Libertine", and "Loves Way" became popular among the artist’s fans.

In January 2017, the singer officially released a single “Bebin” performed in the Persian language. The lyrics talk about women’s rights and fighting for the freedom of art. The same topics are discussed in the music video for the song "Amandine Insensible”. The singer notes that the song isn’t a call to protest but a pointing arrow in the direction for becoming an individual. The same year, Sevda released two popular music videos to the songs, "Bluecid" and "Hear My Pain Heal".

In 2018, Sevda presented one more EP, The Calling. She also recorded two music videos for "Duality" and "Shahmaran".