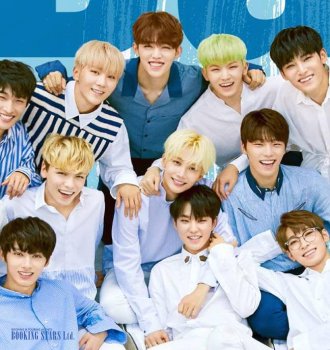 Even though the band’s name is Seventeen, the lineup includes just 13 members. They are divided into three subgroups. Hip-hopers are Vernon, Wonwoo, S.Coups, and Mingyu. Vocalists are Jeonghan, Seungkwan, Joshua, Woozi, and DK. The performers are Hoshi, Jun, Dino, and The8. Pledis Entertainment formed the group in 2015 in Seoul.

The group debuted in May 2015 with a live performance Big Debut Plan on MBC. Three days later, they released the first EP, 17 Carat in digital format. It consisted of 5 tracks, "Shining Diamond", "아낀다", "Jam Jam", "Ah Yeah", and "20", all of which became popular. In September 2015, the musicians recorded the second EP, Boys Be. Songs “Fronting", "Mansae", "When I Grow Up", "OMG", and "Rock" became hits. At that time, many fans tried to book Seventeen for private events.

A year later, the band released a debut LP, Love & Letter. It consisted of two parts, which appeared in April and June 2016 accordingly. The standard version featured 10 songs while the Repackage edition contained 15 tracks. The majority of songs were performed in Korean, except for "Say Yes", "Shining Diamond (Performance Team Ver.)", and "SIMPLE", which came out in Japanese. The album topped South Korean Gaon Albums Chart, came in 8th on Japanese Albums, and settled on the 5th spot of US Billboard World Albums Chart. The album also climbed to the 3rd position of US Billboard Heatseekers Albums Chart.

In 2016, the group worked on the project called Seventeen's One Fine Day, which aired on MBC. In October, the musicians recorded a compilation album, 17 Hits. It reached the 66th spot of Japanese Albums Chart and came in second on Taiwan J-Pop Albums Chart. The album became popular in the USA as well. In December, Seventeen presented a new EP, Going Seventeen. The album sold more than 260,000 copies. It featured such popular songs as "Beautiful", "Boom Boom", "Lean On Me", and "Fast Pace".

In November, the artists officially released another LP, Teen, Age. It came out in standard and special editions. The album topped the South Korean Chart and Billboard World Albums Chart. It is one of the most successful group’s album to date. The LP featured such hits as "Change Up", "Trauma", "Rocket", "Hello", "Flower", and "Thanks".

The group began 2018 with a re-issued LP, which the artists called, Director's Cut. It earned many high scores from the critics. The album topped South Korean Gaon Albums Chart and came in second on US Billboard World Albums Chart and Heatseekers Albums Chart.

In May 2018, the band presented a new EP, We Make You, recorded for the Japanese audience. The album came in 2nd on the Japanese Chart. In July, Seventeen officially released another EP, You Make My Day, which topped the South Korean chart. The same year, the artists worked on the SVT Club project on Mnet. The group went on two tours, Seventeen Concert 'Ideal Cut' 2018 and Seventeen 2018 Japan Arena Tour 'SVT'.

In 2018, Seventeen received two Asia Artist Awards for Artist of the Year and Best Artist. They also got Album of the Year – 2nd Quarter Award (for AI1) at Gaon Chart Music Awards. Throughout their careers, artists have earned a formidable number of awards and nominations.