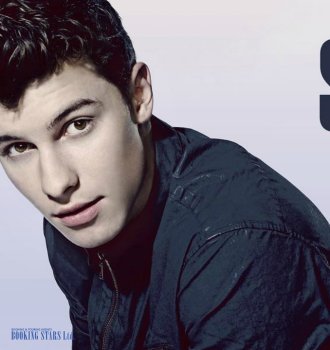 Shawn Peter Raul Mendes was born on 8 August 1998, in Toronto. He has Portuguese and British roots.

When Shawn was 13 years old, he started learning how to play guitar using YouTube lessons. In a year, he started uploading his cover versions of popular songs on Vine. In a fairly short time, Mendes became very popular on the Internet. He collected millions of views. Soon, several music producers noticed the artist’s work and started following his activities.

In 2014, Shawn signed a contract with Island Records. In June, Mendes released his first official single "Life of the Party". The song was very successful. Shawn became the youngest singer whose single made it into top-25 on Billboard Hot 100. Shortly after that, the artist released his first EP, which he called The Shawn Mendes EP. The album featured 4 songs and debuted on the 5th spots on Billboard 200 and Canadian Albums Chart. It also reached top-40 in New Zealand.

The same year, Mendes won a Teen Choice Award in the "Choice Web Star: Music" category. He was also nominated for two more categories. In November, Shawn released a new song “Something Big”, which was the second official single from the upcoming album. It reached the 80th spot on Billboard Hot 100 and high positions on Canadian, Slovakian, and British charts. Later, the song was certified platinum in the USA and Canada.

Mendes released his debut studio LP Handwritten in April 2015. During the first week of sales, it topped Billboard 200 and Canadian Albums Chart. Shortly, it conquered the Norwegian chart, reached the 2nd spot in Denmark, fifth in Portugal, and 8th in Taiwan.

The third single from the album called "Stitches" came out in May. The song debuted on the 89th spot of Billboard Hot 100 and later reached the 4th position. Besides, the single topped UK Singles Chart. The single was certified platinum in 10 countries. Six of the certificates were granted by RIAA.

Handwritten earned a platinum certification in the USA, Canada, Sweden, and Norway. Two platinum statuses came from Denmark and one golden from the UK.

By the end of 2015, Mendes had an impressive collection of awards and nominations. Among the rest, he earned two MTV Europe Music Awards. One more prize came from Teen Choice Awards for the same category as the year before. The young musician became so popular that fans had almost no chances to book Shawn Mendes for any events.

In summer 2015, Shawn released the lead single from his upcoming studio album "Treat You Better.” The song reached the 6th spot on Billboard Hot 100. The album itself, Illuminate, came out in September and debuted on top of Billboard 200 and Canadian Albums Chart. It also conquered 9 more world charts.

In December 2015, Mendes released a live album Live at Madison Square Garden. By the end of the year, he added many more prizes to his collection, including People's Choice Awards, Canadian Radio Music Awards, and MTV Europe Music Awards.

In 2017, Mendes released "There's Nothing Holdin' Me Back". For the third time in his career, Shawn’s song made it into top-10 of Billboard Hot 100. In November, the musician released another live album, MTV Unplugged. The same year he received an American Music Award as "Favorite Adult Contemporary Artist". He also earned three MTV Europe Music Awards, two Teen Choice Awards, and many others.

At the beginning of 2018, Mendes won a prize at Global Awards in the “Best Male” category.