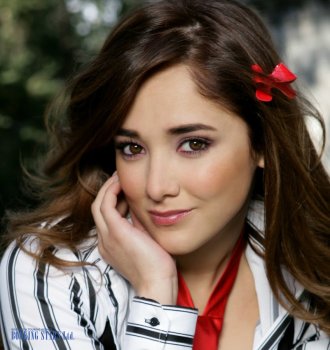 Sherlyn Montserrat González Díaz was born in Guadalajara, Mexico on 14 October 1985. The girl loved music since childhood. At an early age, Sherlyn won a music contest Vamos a jugar y cantar. Later she performed with a teenage Mexican band K.I.D.S. Together they released several albums including El pescador, which was dedicated to Pope John Paul II.

Even though Sheryl had an obvious music talent, she started thinking about an acting career. Since 1989, she acted in different advertising videos. That’s where she was noticed by several people from the TV realm. Soon she landed her first role.

In 1993, Sherlyn debuted in the film Zapatos Viejos (Old Shoes) as Mary. She worked together with a famous Mexican singer Gloria Trevi.

In 1994, Sheryl hosted a comedy show Los papas de mis papas (Dads and their dads). The same year she landed a role in the telenovela Agujetas de color de rosa (Pink Shoelaces), where she portrayed Clarita. The young actress worked with such celebrities as Natalia Esperon and Flavio Cesar. The show ran for two years.

In 2002, the young woman landed a leading role in the series Clase 406 (Class 406). It was Sherlyn’s first serious acting role. She became very popular in Mexico. Since then, not too many people try to book Sherlyn for any event. It’s nearly impossible to do so.

In 2003, Sherlyn tried out for the role of Nessarose in a famous musical Wicked about the lives of Oz witches. However, the role went to the popular Mexican singer Daniela Lujan.

In 2004, Sherlyn got a role of a negative character Conny in the telenovela Corazones al límite (Hearts At Their Limits).

In 2006 and 2007, Sherlyn portrayed Sandy – the leading character in the Mexican version of the famous American musical Grease (Vaselina – Mexican version).

In 2008, Sherlyn was filming TV series Cuidado con el ángel (Be careful with the angel).

In 2014, the actress earned Premios TVyNovelas award for her role in the series Amores verdaderos (True Love) as The Best Young Lead Actress.

Sherlyn has a rather impressive filmography. She is continuously performing in telenovelas, musicals, and theater plays. The young woman doesn’t forget about her singing career either, but she is yet to record her first studio album.

Since 2016, Sherlyn is working as a host of a TV show Netas Divinas (Divine Network).