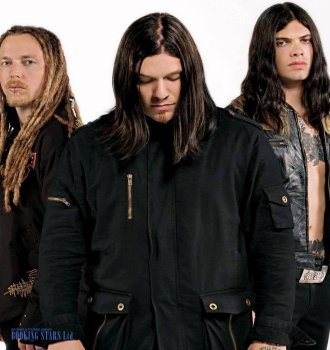 The rock band Shinedown was formed in 2001, in Florida. The current lineup includes Brent Smith, Zach Myers, Eric Bass, and Barry Kerch. The band is particularly famous for such songs as “Second Chance”, “Sound of Madness”, and “If You Only Knew”.

Only a year after formation, the band signed a deal with a recording company Atlantic Records. In 2003, they released their first studio album Leave A Whisper. The LP was successful, reaching the 53rd spot on Billboard 200. Two years later, it became platinum in the USA. The hit singles from that album were “Fly From the Inside” and “45”.

In 2004, Shinedown band members were chosen to go on a USA tour with Van Halen. In August 2005, they released a DVD Live From the Inside, which included a full Shinedown concert at the House of Blues.

In 2005, the band released another LP Use and Them. The single “Save Me” stayed on top of the Billboard Rock chart for 12 weeks. Another single “I Dare You” reached the 2nd spot on the Mainstream rock chart.

In 2006, Shinedown went on a SnoCore Tour with Seether. Then they went on an Equinox tour with Trapt. In June they snagged an opening act for Alter Bridge in London Astoria. Then they were on a North American tour with Godsmack and Rob Zombie. In December, Shinedown joined Soil on Kill Your Lover Part 2 Tour.

In 2008, the band released another album The Sound of Madness. The first single from the LP “Devour” topped the rock charts. Other famous singles from that album are “Second Chance” and “If You Only Knew”.

In 2012, the band released a successful LP Amaryllis. It reached the 4th spot on Billboard 200 and the 18th spot on the UK Albums Chart.

In 2015, Shinedown released their latest studio album to date Threat To Survival. It reached the 6th spot on Billboard 200 and the 13th spot on the UK Albums Chart. The band continues to work on new songs and performs live.