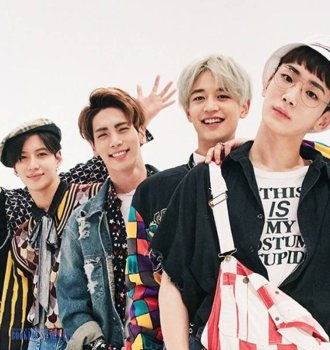 South Korean band Shinee consists of four members, Onew, Key, Minho, and Taemin. The SM Entertainment label formed the group in 2008 in Seoul. The company wanted to create a boy band, which would dictate the dancing and music style of the decade.

In May 2008, the band presented its debut EP, Replay. The album featured just five tracks, including two versions of “Replay”, "In My Room", "Love Should Go On", and "Real".

The group was working hard without any breaks. In August 2008, the musicians already came up with an LP, The Shinee World. The first EP and LP only managed to get into Taiwan charts, failing to appear on South Korean Gaon charts. They climbed to 17th and 11th spots of Taiwan G-Music Chart accordingly. With time, the albums sold 30,000 and 80,000 copies in South Korea.

In May and October 2009, the group presented two EPs, which the musicians called Romeo and 2009, Year of Us. The first one featured six songs performed in Korean, while the second one contained six tracks in English language. The latter earned high scores from the fans in South Korea, Japan, and Taiwan. After its release, many organizers tried to book Shinee for private events.

In 2010, the group presented the second LP, Lucifer. The album also came out as Hello for Taiwanese audience. The album topped weekly and monthly South Korean chart and came in 7th in Taiwan and 14th in Japan.

In 2011, with the assistance of EMI Music Japan, the group recorded a new LP for the Japanese audience, which they called, The First. It featured such popular tracks as "Replay (Kimi wa Boku no Everything)", "Lucifer", and "Juliette".

In 2012, Shinee presented their first live album, The 1st Concert Album "Shinee World". Soon, they came up with a new EP, Sherlock. The album featured seven songs. It reached high spots on South Korean chart and helped the group earn international recognition, climbing the 5th spot of US Billboard World Albums Chart and the 10th position of 10-й US Billboard Heatseekers Albums Chart.

In 2013, the musicians released The Misconceptions Series. The album climbed to the 4th spot of South Korea Gaon Weekly Albums Chart and reached high places on monthly and yearly charts as well. It came out in two versions. In February, the fans saw Dream Girl – The Misconceptions of You. In April, they got their hands on Why So Serious? – The Misconceptions of Me. The same year, Shinee recorded Boys Meet U for its Japanese fans. A little later they came up with an EP, Everybody. It featured such hits as "Symptoms", "Everybody", "Close the Door", and "Colorful".

In 2015, Shinee released a new LP, Odd. The album was highly successful, topping South Korean Gaon Albums Chart and US Billboard World Albums Chart. It also made it to the 9th spot of Heatseekers Albums Chart. Singles “View” and “Married to the Music” became hits.

In 2016, the artists released D×D×D for Japanese fans and 1 of 1 for South Korean fans. In April, they recorded a new live album, The 4th Concert Album "Shinee World IV".

The year 2018 was busy for the group. They recorded a 3-part album, The Story of Light. It appeared in South Korean, Japanese, and American charts. Singles “I Want You” and “Our Page” became hits.