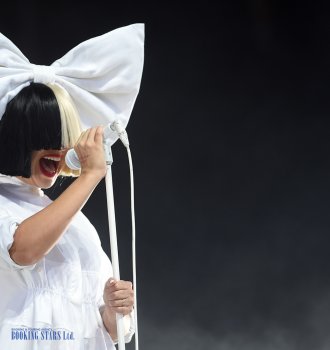 Sia’s full name is Sia Kate Isobelle Furler. She was born on 18 December 1975 in Adelaide, Australia. Sia wanted to become a singer since she was a kid. Her uncle, Kevin Colson, is a famous Australian actor. He helped guide the girl in the right direction. While studying, Sia demonstrated her talent. After graduating, she worked with the group Crisp to record “Word and the Deal” in 1996 and “Delirium” in 1997. Furler was influenced by such artists as Stevie Wonder, Aretha Franklin, and Sting.

In 1997, Sia moved to London, where she performed with such bands as Jamiroquai and Zero 7. Together with Zero 7, she released two hits, "Destiny" and "Distractions". Soon Sia recorded her first studio album, OnlySee. Even though it didn’t chart, the LP eventually sold 1,200 copies in Australia.

In 2000, Sia decided to focus entirely on her solo career. She signed a contract with Sony Music and recorded her debut single “Taken For Granted”. The song made it into the top-10 of UK Singles Chart, which was an excellent result for the young artist. In 2001, she presented the second LP Healing Is Difficult, which brought the singer international recognition. It featured Sia’s debut single and other hits, such as "Fear", "Drink to Get Drunk", "Get Me", "Blow It All Away", "I'm Not Important to You", "Healing Is Difficult", and "Judge Me".

In 2004, Sia presented her third album, Colour the Small One, which climbed to the 14th spot of Billboard Top Heatseekers Albums Chart.

In 2008, the singer released her 4th LP, Some People Have Real Problems. It reached the 26th spot on Billboard 200. The album featured hits, "Soon We'll Be Found", “Buttons”, "I Go to Sleep", and "The Girl You Lost to Cocaine". The first two appeared on the ARIA Chart. Many fans tried to book Sia for their events. However, she was busy recording one album after another.

In 2010, the young singer recorded one more LP, We Are Born. It brought Sia a nomination for ARIA Music Awards for Best Breakthrough Artist - Album.

In 2014, Sia recorded 1000 Forms of Fear. It topped Billboard 200 and several other charts. The singles "Chandelier", "Big Girls Cry", and "Elastic Heart" became international hits. All of them earned several platinum certifications and climbed to high spots on the charts all over the world. The album sold 2 million copies worldwide.

In 2016, This Is Acting came out. The LP topped ARIA Chart and came in 4th on Billboard 200. It became almost as popular as the previous album and earned several platinum certifications. The LP featured such hits as “Alive”, “Cheap Thrills”, and “The Greatest”.

Since 2010, Sia has been working on her acting career. She appeared in such movies as The Twilight Saga: Eclipse, Transparent, The Hunger Games: Catching Fire, Fifty Shades of Grey, Racing Extinction, San Andreas, Beat Bugs, Zootopia, The Neon Demon, Fifty Shades Darker, My Little Pony: The Movie, Fifty Shades Freed, and A Wrinkle in Time.

Since 2018, Sia is part of the band LSD. The singer continues to record new songs and performs live.

How much does it cost to book Sia:
Price inquiry
Sia booking agent:
Contact agent
Sia Contacts:
Send Sia a message
« previous next »