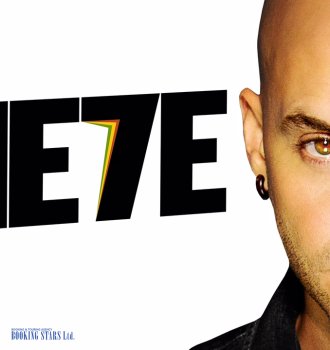 David Rodríguez Labault, known for his pseudonym Siete (“seven” in Spanish), often written as Sie7e, is well known for his love of mixed rhythms. He uses the combination of such music styles as reggae, batucada, Puerto Rican motifs, and pop.

David was born on 7 July 1977 in a Puerto Rican town Bayamon. After finishing high school, the young man moved to the USA to study sound engineering. While studying, Rodriguez had several music projects. He played the guitar in a band and then became guitarist and bassist in a symphony orchestra.

After finishing college, David came back to Puerto Rico, where he continued honing his music talent. In 1999, he joined the band Rituals. Together they recorded many songs, two of which made it to the top ten of the MTV Latin America chart. The singles became popular beyond Puerto Rico. They were played in Argentine, Mexico, Costa Rica and other countries. While working with Rituals, David collaborated with such famous artists as Plastilina Mosh, Control Machete, La Oreja de Van Gogh and Jumbo. He also got a chance to sing at the opening of Juanes’ concert in Puerto Rico.

In 2005, David decided to pursue a solo career. In 2006, he signed a contract with Universal and recorded his debut album Sie7e. The LP conquered the Latin fans.

In 2008, Rodrigues recorded a famous hit “Aló”, which stayed on Latin radio stations for many weeks. A little later, David released “Cógelo Ahora”, the sound of which caught the attention of the local media and soon entered the top-20 list of hit songs on Puerto Rican radio.

Thanks to the huge success of such songs as Aló", "Mucha cosa Buena," and "Cógelo ahora", Rodriguez was invited to participate in promotional videos. One of such videos Pick It Up Now was nominated for Emmy Award. At that time, many clubs tried to book Sie7e for their private events.

Sie7e’s music video “Cogelo” became very popular in Mexico and Spain. The next single “Por si las Dudas” reached high positions on the Puerto Rican radio. One of the most famous Sie7e’s single was his adaptation of the song “Don't Worry Be Happy”.

In 2009, David became a representative of an organization that raised drug awareness in Puerto Rico. With his song “Elévate’ he participated in events to promote the safety of the environment.

In 2011, David recorded a successful album Mucha Cosa Buena. The single from the LP “Tengo tu Love” reached highest spots on radio stations and shined on Billboard charts. The song became an international hit. It was popular in Latin America and Europe. The single was nominated for a Grammy Award. The song brought David a Latin Grammy Award for the Best New Artist.

In 2014, David signed a contract with Warner Music Latino and released a new album Relax. The songs “So What” and “Tocando el cielo” became hits. Even though many years passed since the beginning of his career, David continued mixing music styles as before. This time he played around with retro and contemporary sounds.

How much does it cost to book Sie7e:
Price inquiry
Sie7e booking agent:
Contact agent
Sie7e Contacts:
Send Sie7e a message
« previous next »