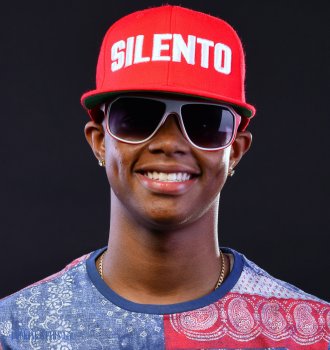 Ricky Lamar Hawk (better known in the music industry as Silento) was born in 1998 on the 22nd of January. Even though Ricky is only 19 years old, he is already gained popularity as a rapper, singer and songwriter. Ricky became famous in 2015 when his debut single entitled “Watch Me (Whip/Nae Nae”) was released. The song was produced in collaboration with Bolo Da Producer already in 2014. However, it wasn’t until the year of 2015 when it was uploaded on the singer’s official YouTube channel.

As amazing as it is, but the fact is that the song was watched more than 2,5 million times during only one week after it was made available. Soon after this unbelievable success, the rapper signed a contract with the Capitol Records. As a result, the track was re-released with the accompanying video. The video for the single was shot in Atlanta. It shows Silento dancing with cheerleaders and his fans. Currently, the video has 100.000.000 views on YouTube. Besides, the single reached the 3rd place in the US Billboard Hot 100. Ricky performed with the song in 2015 at the BET Awards and 2016 at the New Year’s Rockin’ Eve.

The dancing style of the song can be described as the mixture of such traditional styles as Tootsie Roll, the Dougie and the Harlem Shake. Speaking about the production of the song, Ricky says that it was recorded one day after school. He adds that he and Bolo didn’t expect the song to be such a huge success when they were producing and uploading it on SoundCloud. They were surprise to find out how popular it became several days after.

Commenting on the way this popularity changed his life Ricky says that there isn’t much changed. He states that he’s still a 19-old boy who studies at Redan High School in Stone Mountain, Georgia. Of course, people come to him when they see him in the streets and ask him to sign something or make a photo for their Instagram account. Still, Ricky says that he hasn’t changed in terms of his personality or attitudes. It’s truly amazing and great that such an instant rise to fame hasn’t spoiled him.

Silento has recently presented to the public his new single entitled “Young Love”. He worked in collaboration with Skylar Mones on it. The single is available on his YouTube channel. It can already be considered to gain recognition on the part of the public. We’ll see how popular the new single will become.

For sure, there is a bright future waiting for this young musician.