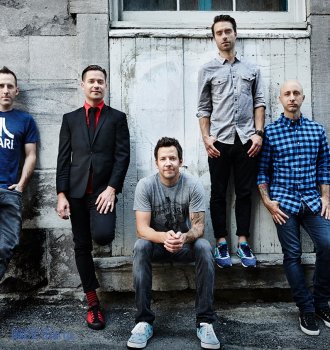 The rock band Simple Plan was formed in Canada in 1999. It’s mostly famous for such hits as “Perfect”, “Welcome to My Life”, “Jet Lag”, and “Summer Paradise”. The band holds various awards, including Juno and Teen Choice.

In 1995, several teenagers from Montreal, including Pierre Bouvier (September 17, 1979) and Chuck Comeau (May 9, 1979) formed a punk group called Reset. The boys gave concerts all over Canada together with such bands as "MxPx", "Ten Foot Pole", "Face to Face". They released only one album but still managed to gain some popularity. In 1997, Comeau left the group in order to go back to school. However, after meeting Jeff Stinco (August 22, 1978) and Sébastien Lefebvre (June 5, 1981), he decided to return to his music career.

In the end of 1999, Chuck met Pierre at a Sugar Ray concert and offered him to join the band. Eventually, the young men established a group called Simple Plan. Bouvier was the vocalist, Stinco and Lefebvre played the guitars, Comeau played the drums, and David Desrosiers was the bassist. Meanwhile, Chuck and Pierre wrote the songs.

In 2002, the band released their first single “I’m Just a Kid”. It reached the 64th spot on the Canadian Singles Chart. The same year the band participated in the Vans Warped Tour. Later that year, the band signed a contract with Lava Records and released their debut album No Pads No Helmets…Just Balls. The album was very successful. It reached the 8th spot on Canadian Albums Chart and 35th spot on Billboard 200. It was certified platinum in several countries.

In 2004, the band released their second album Not Getting Any… It turned out to be their most successful LP so far. The album reached the 2nd spot of Canadian Albums Chart and 3rd spot on Billboard 200. It brought the band international recognition by reaching top-10 spots on various European charts.

Simple Plan released three more albums, the latest one being Taking One for the Team (2016). This album was slightly less successful than their previous work but still reached the 4th spot on Canadian Albums Chart. A single from that album “I don’t Want To Go To Bed” was certified golden by MC. Simple Plan continues to write new songs and perform live.

Simple Plan is a great choice for your event! Book a celebrity right now and get the best conditions and prices!