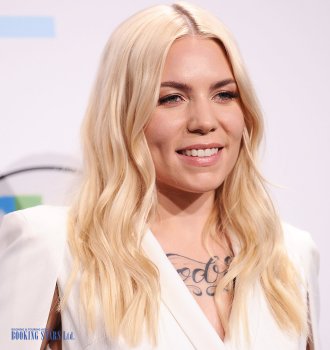 Skylar Grey was born on February 23rd, 1986, in Wisconsin, USA. She is a singer and a songwriter. Grey is mostly famous for such songs as “Invisible” and “C’mon Let Me Ride”. She holds several awards, including an MTV Video Music Award and Vevo Certified Awards. Grey was nominated for a Grammy four times.

Skylar Grey (real name Holly Brook Hafermann) started singing when she was just a kid. Holly performed with her mother in a duo called Generations. Together they recorded three independent albums. When Holly was 15, she formed her own band. She worked with such jazz musicians as Jeff Eckles, Tim Whalen, and Leo Sidran.

In 2003, Holly moved from Wisconsin to LA and recorded a demo album. She was noticed by a guitarist by Linkin Park, who helped Holly sign a deal with Machine Shop Records.

In 2006, Holly released her first album Like Blood Like Honey, which was mostly a failure. But she didn’t give up and continued to work on her music career.

In 2009, Holly took part in an advertising campaign Ciao Water. The 30-second ad featured her song “It’s Raining Again”. The young woman also participated in recording other artists’ albums such as Brie Larson’s Finally Out of P.E. and Fort Minor’s The Rising Tied.

In 2010, Holly performed in the musical Whisper House. The same year she released her third EP O’Dark: Thirty which was produced by Duncan Sheik and Jon Ingoldsby. The same year Holly decided to take a break from the fast- paced life in LA and moved to a small house in the woods where she wrote and produced new songs. When she came back, she was offered a job with a hip-hop producer

In 2011, Skylar recorded her first single “Invisible”. It reached the 10th spot on US Dance Chart and 63rd spot on UK Singles Chart.

In 2016, Skylar recorded her third album Natural Causes, which wasn’t popular in the US but received recognition in Europe. Grey continues to write new songs and performs live.

To book Skylar Grey right now, you can simply call us! Do not miss an opportunity to invite celebrity to your event!