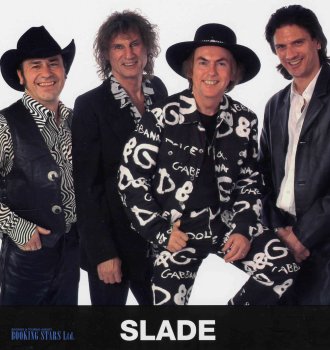 Slade is a glam rock band, which was established in 1966. It conquered the hearts of the British audience in the early 1970s. They created six chart-topping singles and 11 of their songs got into the top-5 of the British Singles Chart. The original group members were Noddy Holder, Dave Hill, Jimmy Lea, and Don Powell.

In 1966, Holder left for another group Listen and met Jimmy Lea. Jimmy and Noddy decided to create a new group. They joined Don and Dave and started to perform under the name N’Betweens. They didn’t manage to gain any popularity.

But in 1969, the group was invited to the recording studio Fontana, where they got a chance to record their first long play. The studio manager suggested that they change their name to Ambrose Slade. The same year they recorded their first album Beginnings. The first album remained mostly unpopular just as the second album Play it Loud.

In 1972, the group released a live album Slade Alive, which stayed in the charts for over a year. The international popularity came to the band after the release of the third album Slayde. The glam rock was on the rise and the band managed to get the best of it. The album tops British and Australian charts and gets into the top-10 of the European charts.

In 1973, the band released a single “Merry Xmas Everybody” that sold 250,000 copies and stayed on top of the UK single chart for 5 weeks.

In 1976, the new album Nobody’s Fool made the fans forget about the glam rock and featured hard rock genre. However, the popularity of the band was slowly waning. They released a few more albums, including Whatever Happened to Slade (1977), which featured heavy metal genre. They experience another upheaval in the 1980s but it lasted for a few short years.

In 1994, Don and Dave established another band “Slade II” but it didn’t succeed.

This band is available for booking right now! Book a celebrity online on our website!