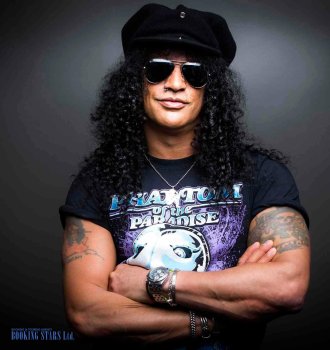 Slash was born in London on July 23, 1965. He is a singer and a songwriter, who is best known for his performances with the band Guns N’Roses. Slash is particularly famous for such solo songs as “By The Sword” and “Beautiful Dangerous”. He holds a variety of music awards.

Slash’s real name is Saul Hudson. His mother is an African American and his father is from England. Both parents worked in show business. Hudson’s mother was a costume designer. His father was an album styling artist. When Slash was 11, he moved with his mother to LA. His father immigrated to the USA after some time to join the family.

When Slash was young, he liked wearing black t-shirt and pants while sporting a long hairstyle. He was used to the peculiarities of the world of show business thanks to his parents. His mom and dad often invited such guests as Joni Mitchell, David Geffen, David Bowie, Ron Wood, and Iggy Pop. In the mid 70’s Slash’s parents divorced and he moved in with his grandmother, who gave Saul his first guitar. Back then, he was influenced by such artists as Led Zeppelin, Eric Clapton, Rolling Stones, Aerosmith, and the like. Slash spent hours learning how to play guitar. Sometimes he would play for 12 hours in a row. This negatively affected his grades in school.

After some time, Slash joined the band Road Crew and quit high school. Eventually, the band found new members and turned into the famous group Guns N’Roses. In 1987, the band released a very successful album Appetite for Destruction, which helped Slash earn international popularity. The band went on a variety of world tours and sold millions of albums.

In the mid 1990’s, Guns N’Roses were on a hiatus and each of the members was looking for new gigs. Back then Slash formed another band Slash’s Snakepit and released a successful album, It’s Five O’Clock Somewhere.

In 1996, Slash performed in Europe with another band Slash’s Blues Ball. Then they went on an American tour.

In 1997, Slash left Guns N’Roses and went back to Slash’s Snakepit. He found new band members and recorded another album, which was a failure.

In 2010, Slash released his first solo album Slash. The LP reached the 3rd spot on Billboard 200 and 17th spot on UK Albums Chart. It was certified platinum in several countries.

Slash went on to record two more solo albums Apocalyptic Love (2012) and World on Fire (2014), both of which were successful.

In 2016, Slash reunited with Guns N’Roses to go on a tour. Slash continues to work on his music career and performs live.