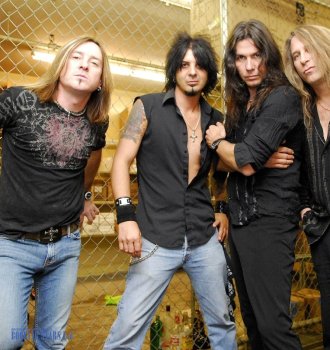 This glam metal band was formed in Las Vegas, in 1988. The current lineup includes Mark Slaughter, Dana Strum, Zoltan Chaney, and Jeff “Blando” Bland. They are particularly famous for such songs as “Up All Night’, “Fly to The Angels”, and “Spend My Life”.

In 1990, the band released the first studio album Stick It To Ya. It was a big hit, reaching the 18th spot on Billboard 200 and earning two platinum certifications in the USA. The LP contained the band’s most famous singles to date “Up All Night” and “Fly To The Angels”. The same year, the band went on a tour with Kiss and released an EP Stick It Live. They also received and American Music Award.

The second album The Wild Life (1992) became even more successful than the predecessor. It reached the 8th spot on Billboard 200 and the 64th spot on UK Albums Chart. The LP was certified gold in the USA and platinum in Canada. After the release, Slaughter went on a tour with Ozzy Osborne and Damn Yankees.

In 1994, the band was recording their third album Fear No Evil. Soon after the release, the members started having problems. The guitarist and the band’s tour manager were arrested for drug possession. Then Dana Strum got into an accident. Even though the band still managed to complete the album, the recording studio Chrysalis wanted to end the deal.

The band members spend more than 7 months trying to buy the rights to the LP and eventually released it with CMC International in 1995. By that time, the glam rock stopped being as popular as before and the LP reached only the 168th spot on Billboard 200. After the release, Slaughter went on a tour in Japan, where their concerts were big hits.

In 1997, the band released Revolution, which failed to make it into the charts. They went on a tour Rock Never Stops in support of the album.

In 1999, the band released their last LP to date Back to Reality, which wasn’t any more successful than their previous album. The band went on a variety of tours and released compilation albums. Today Slaughter continues to perform live.

Slaughter is a great choice for your event! Book a celebrity on our website online!