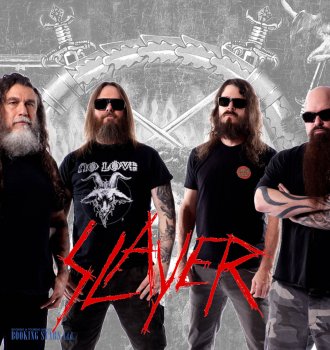 Slayer is an American heavy metal band formed in 1981 in California.

It's hard to imagine a more provocative 80s metal band than Slayer. Unlike colleagues in the shop, the musicians have chosen a slippery anti-religious theme, which has become the main one in their creative activity.

The provocative nature of creativity often delayed album releases due to protests from religious leaders. In some countries around the world, the sale of Slayer's albums is still banned to this day.

How did the fate of these radical musicians develop? We offer you a detailed biography of the thrash metal band Slayer, which is able to attract the attention of even those who are far from such extreme music trends.

Slayer's history began in 1981, at the dawn of thrash metal. The band was founded by two guitarists - Kerry King and Jeff Hanneman. They met quite by accident while auditioning for a local heavy metal band. Realizing that there is a lot in common between them, the young musicians decided to create their own team, in which they would be able to realize their many creative ideas.

Kerry King invites Tom Araya to the group, with whom he already had experience of performing in his previous group. The last member of the newly formed metal band is drummer Dave Lombardo. At that time, Dave was an ordinary pizza delivery man who met Kerry during the delivery of another order. Upon learning that Kerry King was playing the guitar, Dave offered his services as a drummer, eventually getting a place in Slayer.

Satanic themes were chosen by the musicians from the very beginning. Their concerts featured inverted crosses, huge thorns and pentagrams, thanks to which Slayer immediately attracted the attention of heavy music fans. Despite the fact that it was 1981, such overt Satanism in music continued to be a rarity.

This attracted the attention of a local journalist, who asked the musicians to record one song for the upcoming Metal Massacre 3 compilation. Aggressive Perfector caught the attention of the Metal Blade label, which offered Slayer a contract to record the album.

Despite the collaboration with the label, as a result, the musicians received practically no money for recording. So Tom Araya and Kerry King had to spend all their savings on the creation of their debut album. Going into debt, young musicians made their way on their own.

The result is the first album in the history of the group, Show No Mercy, which was released in 1983. The work on the recording took the guys only three weeks, which did not affect the final quality of the material. The record quickly grew in popularity among heavy metal fans, which allowed the band to embark on their first full-length tour.

In the future, the group creates a much darker style in the lyrics, and also significantly heavier its original thrash metal sound. In a matter of years, Slayer has become one of the leaders of the genre, releasing one hit after another.

In 1985, a much more expensive and high-quality studio album, Hell Awaits, was released, which became a landmark in the work of Slayer. The main themes of the disc were hell and Satan, which will figure in the band's work in the future.

But the real breakthrough for Slayer was Reign in Blood, which was released in 1986. At the moment, the release is considered one of the most important in the history of metal music.

The high level of recording, much cleaner sound and quality production allowed the group to demonstrate not only their unprecedented aggression, but also musical prowess. The music was not only fast, but incredibly difficult. The abundance of guitar riffs, fast-paced solos and blast beats was off the charts.

At the same time, the group had the first problems with the release of the album, connected with the title theme Angel of Death, which has become the most recognizable in the entire work of the group.

It was dedicated to the monstrous experiences of the Nazi concentration camps, as a result of which the disc was not included in the catalog and passed the radio broadcast. This did not stop Reign in Blood from taking 94th place on the Billboard 200.

Slayer followed up on their success with two more thrash metal albums, South of Heaven and Seasons in the Abyss. But then the first problems began in the group. Due to creative conflicts, Dave Lombardo left Slayer and Paul Bostaph was called to his place.

The 90s are a time of change for Slayer. The band begins to experiment with their sound, moving further and further away from the thrash metal genre.

First, the band released an experimental album of covers, after which they released an unusual album Divine Intervention. Despite this, the disc debuts on the hit parade.

Book a celebrity online on our platform! Fill in the application form and enjoy the concert of your favorite band!