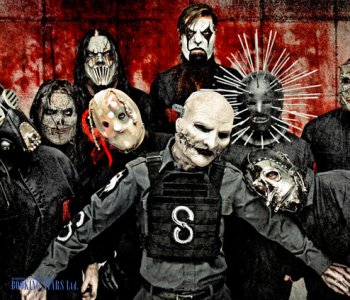 The legendary rock band Slipknot was formed in 1992 by Shawn Crahan and Anders Colsefni. The young artists were friends and enjoyed the same songs. One day, they decided to create new music together. Shawn was a drummer while Anders was a vocalist.

Soon, the two friends found another member, Paul Gray. The artists called their trio Heads on the Wall and began rehearsing. However, Crahan was going through some personal problems, which didn’t allow the band members to continue their work. Next time, friends came together in 1995. They invited a guitar player Donnie Steele, a drummer Joey Jordison, and a rhythm-guitar player Kan Hong. Kan and Donnie were later replaced by Josh Brainard and Craig Jones. Later, Mick Thomson joined the band
After dealing with lineup changes, the band started working on a new album. Musicians came up with a new name, Slipknot. They found an original style and stuck with it. All members were coming onstage in scary masks while Anders put duct tape over his face. A year later, a talented vocalist Corey Taylor joined the group.

In 1996, Slipknot presented the debut LP, Mate.Feed.Kill.Repeat. It came out on Halloween. The band released 1,000 copies, but hardly all of them were sold. Musicians realized that they needed a good producer, who could promote their work. They started working with Ross Robinson. After auditioning the band, Robinson saw a high potential. A year later, Slipknot signed its first contract with a label.

In 1999, the band presented a new LP, Slipknot. It was much more successful than the band’s previous work. Right after the release, the members reviewed their images. They purchased higher quality masks and started giving more concerts. Each one of the band’s performances made a big impression. Unusual images coupled with high-quality music helped musicians acquire new fans. Many organizers tried to book Slipknot for private events.

In 2000, the group started giving more concerts and working on a new album. The next LP, Iowa, came out in 2001 and featured such hits as "Left Behind", "The Heretic Anthem", and "My Plague". The latter was used as a soundtrack for the movie Resident Evil starring Mila Jovovich.

In 2004, Slipknot presented a new album, Vol. 3: The Subliminal Verses. The LP featured such popular tracks as "Duality", "Vermilion", and "Before I Forget". The latter brought the band a Grammy Award and became platinum in the USA.

The next LP came out four years later. It was All Hope Is Gone. The LP immediately topped the charts and set sales records. The musicians embarked on a long tour to support the album. It lasted for over a year. This tour was the longest arranged by the band to date.

In 2010, Paul Gray died from a drug overdose. A little later, Joey Jordison left the band. Fans started talking about the possibility of disbanding. However, the remaining members didn’t confirm such rumors. Even though that period was tough on Slipknot, artists managed to cope and move forward, working on a new LP. Its release occurred in 2014. .5: The Gray Chapter was a tribute to Paul. It reached high spots on the charts and went gold in many countries. At the same time, the band filmed a music video for the single "The Negative One", which became a hit. The song was nominated for a Grammy Award. After the album’s release, the musicians took a break until 2017.

In 2017, fans started talking about the next album. Band members confirmed that they were working on it. However, the release was delayed. Eventually, the LP came out in August 2019. Musicians called it We Are Not Your Kind. The album was recorded with the support of Roadrunner Records. It featured such successful songs as "Unsainted", "Birth of the Cruel", "A Liar's Funeral", and "Death Because of Death".

Music critics gave the new album excellent reviews. Metacritic rated it 89 out 100. It topped numerous charts, including Billboard 200 and the UK Albums Chart.