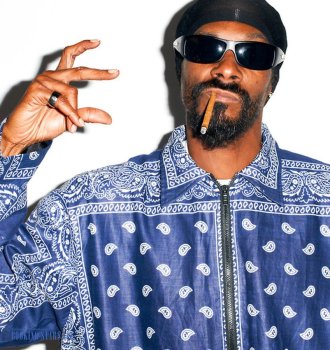 Snoop Dogg’s real name is Calvin Cordozar Broadus Jr. He was born on 20 October 1971. Calvin’s father left the family when he was very young. The boy grew up in Long Beach, California. In high school, he became a member of a gang, which led to problems with the police. Later he enrolled in Long Beach Polytechnic High School but graduated later than expected since he spent some time in prison for drug possession.

Calvin’s pseudonym Snoop goes back to his childhood. The boy’s mother called him by the name of his favorite cartoon character.

In 1992, Calvin’s life took a positive turn when he met Dr. Dre. The famous rapper got a hold of Snoop’s demo songs. Soon, the aspiring artist recorded a song, which was featured in the movie Deep Cover. He also worked on the tracks, which were included in Dr. Dre’s album, The Chronic.

This LP was long awaited by many fans. More than half a million copies were pre-ordered. The LP climbed to the third spot of Billboard 200.

Problems with the law didn’t interfere with Snoop’s wish to become famous. In 1995, he founded his own label Doggy Style Records. A year later, he released the second studio album, Tha Doggfather. The musician dedicated that the LP and all the tracks are dedicated to the recently killed Tupac Shakur. In 1997, the rapper participated in the Lollapalooza tour. At that time, many fans wanted to book Snoop Dogg for different events.

In 1998, the rapper started working with No Limit Records. With the label, he recorded three popular albums, Da Game Is to Be Sold, Not to Be Told, No Limit Top Dogg. and Tha Last Meal.

In 2004, Snoop Dogg tried an acting career. He debuted in the comedy Starsky and Hutch. The same year, the band 213, which Snoop Dogg, Nate Dogg, and Warren G founded in the 1990’s, reunited. They recorded a new album, The Hard Way. The LP climbed to the 4th spot of Billboard 200 and sold 95,000 in the first week. The single "So Fly" came in second on Billboard Bubbling Under Hot 100 Singles. Another song "Groupie Luv" climbed to the 26th spot.

In 2006, Snoop was nominated for a Grammy for his song “I Wanna Love You”. He also worked with Pussycat Dolls on the song “Buttons”. The same year, Dogg participated in a scandal with British Airways. The 213 band members were detained for disruptive behavior in London airport.

Snoop Dogg became the third rapper after Tupac Shakur and The Notorious B.I.G. to have a wax figure in Madame Tussaud’s museum in London.

In 2011, the artist recorded a soundtrack to the movie Mac & Devin Go to High School.

Between 2015 and 2018, the artist presented studio albums, Bush, Coolaid, Neva Left, and Bible of Love. They weren’t as commercially successful as Snoop Dog’s previous projects but still reached high spots on the charts.