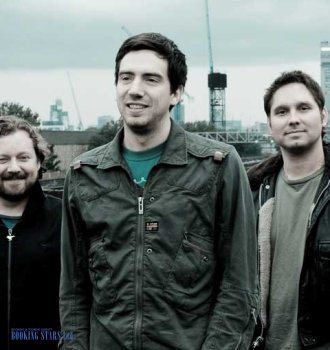 The founders of Snow Patrol Gary Lightbody and Mark McClelland spent their childhood in Ireland. In 1994, they met while attending Dundee University in Scotland. While they were freshmen, the aspiring artists arranged music sessions in the room where Mark’s girlfriend lived. They invited a drummer Michael Morrison and tried playing rock. The young men were doing a pretty good job. The musicians decided to rehearse on a regular basis. In December 1994, they gave their first concert at the university. The initial name of the band was Shrug.

During the Christmas vacation, the group was rehearsing in Morrison’s family home in Belfast. The artists performed at the local stages, honing their skills. At the beginning of 1995, upon their return to Dundee, the musicians recorded their first EP, The Yogurt vs. Yogurt Debate, which they sent to record labels.

In 1996, Morrison left the band. Another drummer Richard Colburn took his place. In November, the group changed the name to Polarbear because Shrug was taken by another American group. In June 1997, the group released an EP, Starfighter Pilot. After the release, the artists had to come up with a new name since Polarbear was taken as well. That’s how they became Snow Patrol. The same year, another drummer, Jonny Quinn, joined the band.

In August 1998, Snow Patrol released its first LP, Songs for Polarbears, which didn’t become as successful as the artists hoped initially but reached the 143rd spot of the UK Albums Chart and eventually earned gold status. After the release, the band moved to Glasgow. In 2000, the artists worked on their second LP, which came out in March 2001. The album When It's All Over We Still Have to Clear Up earned positive reviews from the critics. It came in 129th on the UK Albums Chart and became golden.

At the end of 2001, the group’s contract with the label ended and the artists were in a tough financial situation. To support the band, Lightbody had to sell his disc collection. The musicians tried earning money giving concerts on local stages.

In 2002, Snow Patrol signed a contract with a famous manager Jazz Summers, the founder of Big Life label. In the spring, Nathan Connolly from File Under Easy Listening joined the group as a guitar player and back vocalist. In August 2003, the band presented Final Straw, which featured pop-rock elements rather than the familiar indie sound. The album topped US Top Heatseekers chart and came in 2nd on the UK Albums Chart. After the release, fans tried hard to book Snow Patrol for private events.

In March 2005, one of the band’s founders, Mark McClelland, left due to disagreements within the team. Paul Wilson from Terra Diablo took his place. At the same time, a keyboard player Tom Simpson, who used to be a touring member of the group, became a permanent one.

In October 2005, the team began working on a new album. To improve the music quality Quinn and Simpson took lessons. In May 2006, the fourth LP, Eyes Open, came out. It earned excellent reviews from the critics and became the most sold album in the UK in 2006. The LP topped British, Irish, Australian, and New Zealand charts. It also came in 27th on Billboard 200.

In October 2008, the artists released their fifth LP, A Hundred Million Suns, which came in second on the UK Albums Chart and settled on the 9th position of Billboard 20. After the release, the band went on a world tour, Taking Back the Cities Tour, which continued until 2010. The musicians gave 150 concerts.

In November 2009, Snow Patrol released a compilation album of their favorite songs, Up to Now. It came in third on the official British chart. In November 2011, the 6th LP, Fallen Empires, came out. The guest artists were an American singer Lissie and the future band member Johnny McDaid. The album fared well on British and American charts.

In May 2013, the artists presented a compilation album, Greatest Hits. In August, Simpson left the team, and McDaid took his place. The release of the next album was planned for 2016. However, the leading songwriter Lightbody faced some personal struggles, and the release was delayed. The LP, which the musicians called Wildness, eventually came out in May 2018. It settled on the 2nd spot of the UK Albums Chart.