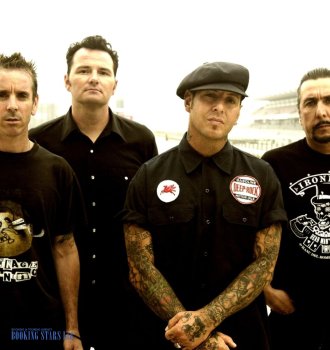 The punk rock band Social Distortion was formed in California, in 1978. The current lineup includes Mike Ness, Jonny Wickersham, Brent Harding, David Hidalgo Jr., and David Kalish. The band is particularly famous for such hits as “I Was Wrong”, “Bad Luck”, and “Far Behind”.

The first concert given by Social Distortion in a nightclub was disrupted by the police. Mike Ness spit in the cop’s face and was immediately arrested. Upon release, Mike continued working with the band and invited even more controversial members, such as Dennis Dannell. He was a bass guitar player for three years and then switched to a guitar. Other band members weren’t happy with the choice. As a result, two of them left to form their own band.

While Social Distortion was dealing with lineup changes, their songs started to gain popularity by appearing on the radio. As a result, they signed a contract with Posh Boy. In 1981, the band released their first single “Mainliner”, which failed to get into any charts. A year later, the band was shown in a documentary Another State of Mind and went on a big tour of the USA.

In 1983, the band suffered through new lineup changes and legal problems. The same year, Ness became addicted to drugs. As a result, the band gave very few concerts at the local clubs. Between the concerts, Ness was either hospitalized or arrested. In 1985, Ness went into rehab and came back in 1988.

In 1990, the band signed a deal with Epic and released their third studio album Social Distortion, which made the charts and eventually received a gold certification. Two years later, their LP Somewhere Between Heaven and Hell reached the 76th spot on Billboard 200.

The next 2 LPs White Light, White Hear, White Trash (1996) and Sex Love and Rock’n’Roll (2004) got high spots on the charts. The latest studio album to date Hard Times and Nursery Rhymes was the band’s most successful LP. It reached the 4th spot on Billboard 200 and topped the Independent Albums Chart. The band continues to work on new songs and performs live.