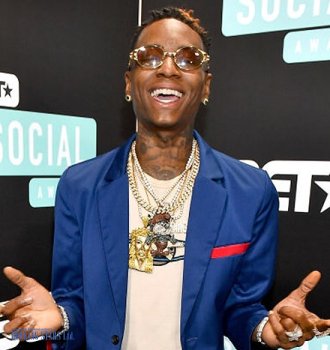 Soulja Boy’s real name is DeAndre Cortez Way. He was born in 1990 in Chicago. In 1996, Way’s parents divorced, and, together with his mom and younger brother, DeAndre moved to Atlanta. While still in middle school, Way became a big fan of rap. His first rap teacher was J-Kwon, whose lessons, according to Soulja Boy, were priceless. In 2004, DeAndre’s mom couldn’t support the two boys well anymore and his father took Way to Mississippi.

When DeAndre’s father found out about the boy’s love for rap, he decided to support the hobby and offered Way to work in a recording studio. In 2004, Soulja Boy and Arab formed a duo The 30/30 Boys. The group recorded several songs and uploaded them to SoundClick. They earned many positive reviews. Seeing that his work is worth something, DeAndre decided to start a solo music career. He contacted a manager, who helped the young rapper arrange a concert in Indianapolis.

In November 2005, Soulja Boy uploaded his first solo song on SoundClick. It earned impressive popularity. DeAndre understood that he could achieve big heights by promoting his work on the Internet and created YouTube and MySpace accounts.

In March 2007, the rapper released an independent album called Unsigned & Still Major: Da Album Before da Album. In May, he presented a debut single “Crank That”. The song was extremely successful. It helped the artist sign a contract with a label. The single topped Billboard Hot 100 for a whopping seven weeks. The Rolling Stones magazine put it on its list of the best singles of the year. In just one year, more than 3 million copies were sold in the USA.

When recording a music video for “Crank That”, Soulja Boy and his friends came up with a special dance, which went viral. It stopped a little short of becoming more popular than “Macarena.” In August, the music video was uploaded to YouTube. By the end of the year, it collected 27 million views.

In October, the rapper presented a debut LP, Souljaboytellem.com, which came in 4th on Billboard 200. The album sold 117,000 copies in the first week. However, the LP earned mostly negative reviews from the critics, who named the album monotonous. Nevertheless, many clubs tried hard to book Soulja Boy for private events.

In November, the artist presented a single “Kiss Me thru the Phone", which came in third on US Billboard Hot 100 and topped Hot Rap Songs Chart. The singer continued working non-stop. By December, he already presented his second LP, iSouljaBoyTellem, which didn’t manage to get many positive reviews, just like its predecessor. However, the critics noted some improvements over the first album. The LP climbed to the 43rd spot of Billboard 200. In December, Soulja Boy was attacked by robbers in his home but didn’t suffer any serious injuries.

In January 2009, the rapper released a single “Turn My Swag On”, which climbed to the 19th spot on Billboard Hot 100 and came in third on Hot Rap Songs Chart. In June 2010, the fans welcomed a new song "Pretty Boy Swag", which settled on the 34th spot of Billboard Hot 100. The single was featured in the new LP.

The third LP, DeAndre Way, came out in November 2010. About 13,400 copies were sold in the first week, which was less than the rapper hoped for. Nevertheless, the critics gave good reviews to the album. In March 2011, the artist lived through a tragedy. His younger brother died in a car accident.

Between 2011 and 2014, Soulja Boy released numerous mixtapes, delaying his work on the fourth LP. In the spring of 2014, he presented the first independent digital album, Super Dope. In June, the second digital album, King Soulja 3, came out. It was recorded with the assistance of Gudda Gudda and Rich The Kid.

In January 2015, the rapper presented his third independent album, Loyalty. In June, he released King Soulja 4. In 2016, Soulja Boy came up with two more independent albums, Stack on Deck and Better Late Than Never.

In 2018, DeAndre presented two independent albums and three mixtapes. In January 2019, he released another mixtape, Fuego.