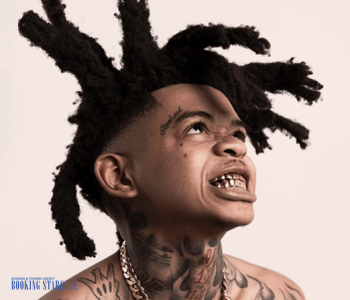 SpotemGottem - Florida rapper who broke through with his viral track "Beat Box."

Florida rapper SpotemGottem broke through with his booming 2020 trap anthem "Beat Box," combining aggressive flows with a bass-heavy instrumental for a viral hit. He included a remix of the track featuring a new verse from Pooh Shiesty on his debut mixtape, Final Destination, also released in 2020.

SpotemGottem grew up in the Jacksonville, Florida area and was releasing his own tracks online by the time he was 16. By 2018, the rapper had drawn significant attention with a few stand-alone tracks, including the sentimental "Street Gossip." He released the five-song EP Osama Story in 2020, and followed it quickly with the single "Beat Box," which would become one of his best-known songs. After issuing several other songs, he compiled some of his best already-released material with new tracks on his 2020 mixtape Final Destination. In addition to the Pooh Shiesty feature on the new version of "Beat Box," Final Destination also saw SpotemGottem joined by rappers Hotboii and Jackboy.