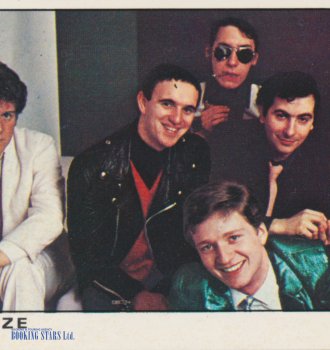 Squeeze is a British rock band formed in 1974.

One of the more traditional pop bands of the new wave, the English collective Squeeze has merged classic Brit-pop and post-punk into a work.

One of the more traditional pop bands of the new wave, the English collective Squeeze has merged classic Brit-pop and post-punk into a work. Inspired by the Beatles and the Kinks, Squeeze became a vehicle for composers and songwriters Chris Difford and Glenn Tilbrook to express themselves in the 1980s aspiring to break the high standards set by Paul McCartney and John Lennon. Unlike their famous counterparts, this was a genuine collaboration where they first wrote the lyrics and then co-wrote the music for it. Squeeze certainly failed to come close to the success of the Beatles, but they nonetheless borrowed quite a bit of their charm. While Britain was immediately enthusiastic about Squeeze and singles like "Take Me I'm Yours" and "Up the Junction", which quickly gained a foothold in the national Top10, the group had difficulty penetrating the US market. For 10 years after their debut and until 1987, they did not manage to get into the Top40 USA. And although the ensemble did not have hits overseas, it became a kind of cult, a role model, and this charm remained with them until the end of the 90s, as evidenced by the platinum status of their collection Singles 45's and Under, compositions from which: "Another Nail In My Heart, "" Pulling Mussels (From the Shell), "" Tempted, "and" Black Coffee In Bed "have become pop classics of the new wave era.

The first three years were not easy for Squeeze. Lead vocalist Chris Difford and Glenn Tilbrook formed an initially unnamed ensemble in 1974. Tilbrook responded to a Difford advertisement in a shop window and the newly formed duo began writing songs. In the spring of that year pianist Jools Holland joined them. drummer Paul Gunn and the band called themselves Squeeze. The band began to play typical pub rock of the time, but with a softer sound and a pronounced melody. In 1976, bassist Harry Kakoulli joined the line-up, and Gilson Lavis, who had previously worked as concert manager for Chuck Berry and even played in his support group, was taken on as drummer Gilson Lavis. At this time, they signed a contract with the BTM record label. It is interesting in this regard that the band had already tried to sign a contract with RCA, for which they recorded several demos with Muff Winwood, but the company did not like the material. Another setback soon followed: in early 1977, BTM went bankrupt before releasing their debut single "Take Me I'm Yours," but the band nevertheless began work on their debut album.

In the summer of 1977, Squeeze released their debut 45th Packet of Three on Deptford Fun City Records, and were soon signed to A&M Records, becoming the first "new wave" band to finally hit the label after a disastrous partnership with the Sex Pistols. The band worked on the first record (tentatively called Gay Guys) under the direction of producer Cale, who threw out most of the previously recorded fairly standard material and forced them to work on recording new ones. By the time the record was released, the company had pressured the band to change the disc's title to a less provocative one, and in the spring of 1978 the debut album Squeeze was released. In the United States, both the band and the record changed their name to UK Squeeze to avoid confusion with the local band Tight Squeeze, but by the end of the year they had reverted to their original name as popularity grew. The album itself was quite successful with the hit "Take Me I'm Yours", but the real takeoff was expected in Britain next year with the release of the second disc Cool for Cats (1979). Two singles from the album, pilot and "Up the Junction", reached # 2 on the UK charts. Following his release, Kakulli was replaced by John Bentley.

The third disc, Argybargy (1980), received very high marks from music critics and contained several compositions that hit the English charts: "Another Nail In My Heart" and "Pulling Mussells (From the Shell)." Both songs, plus "If I Didn't Love You," became hits in new wave clubs and radio stations in America, giving the band cult status and making the album the first overseas album to hit # 71. Jules Holland, who prefers simpler music in the boogie-woogie style began to feel uncomfortable with the Difford-Tilbrook tandem, deepening more and more complex compositions, and left Squeeze in the late 1980s to form the Millionaires. He was replaced by Paul Carrack, a former member of Ace. After Argybargy, Tilbrook and Difford were nicknamed "the new McCartney and Lennon", which was given to them by critics both in the States and at home. In order to consolidate their success and solidify their reputation, Squeeze attempted to record their "Sergeant Pepper". Elvis Costello and Roger Bechirian collaborated on East Side Story (1981) and produced by Dave Edmunds. The summer release was immediately followed by rave reviews, but overall, the work did not become as hit as the musicians planned: # 19 UK and # 44 USA. Carrack's soul song "Tempted" did not make it to the English Top40, but became the first single of the band to hit the overseas charts, hitting the Top50 USA. Only the single "Labelled with Love" made it to the English Top10. In late 1981, Carrack leaves Squeeze to join Carlene Carter; and is replaced by Don Snow, the classical pianist who previously played with Sinceros.

After the release of their debut album and until 1982, Squeeze worked and toured without a break, and as a result, Sweets from a Stranger (1982) already carried a certain touch of fatigue and exhaustion. Despite the fact that the disc rose to an all-time high for the band in the US charts (# 32 shortly after its release in the spring), its contents were quite uneven. In England, it was received very coolly, reaching only 37th position, and the single "Black Coffee in Bed" was only 51st. However, they had a huge fan base and the band was honored to play a gig at Madison Square Garden in the summer of 1982. Tired of touring and frustrated by the commercial results, Difford and Tilbrook decided to disband the band at the end of the year, releasing Singles - 45's and Under compilation. As is the law of meanness, Singles climbed to number three in Britain and went platinum in America.

Despite the disbandment of Squeeze, Difford and Tilbrook did not intend to end their partnership and decided to work on other projects. They wrote music for Helen Shapiro, Paul Young, Billy Bremner and Jools Holland. The creative tandem also worked on the musical Labelled with Love, which ran for a while at Deptford in early 1983. In 1984, they released the self-titled album Difford & Tilbrook, which introduced a new more sophisticated sound and stage image. The recording enjoyed some success, and the duo were already thinking about reviving Squeeze again. In early 1985, the band teamed up to participate in charity concerts and events with Tifford Tilbrook Holland and Lavis. Bassist Keith Wilkinson later joined the band. Cosi Fan Tutti Frutti appeared in the fall of 1985 and received positive reviews and good sales. Their next work, Babylon and On (1987), was successful, peaking at # 14 on the UK album charts and hitting hits: "Hourglass," accompanied by the original video and peaking at # 15 in the States, and "853-5937." in Top40. After completing a world tour, which included another concert at Madison Square Garden, keyboardist Metclaf left the band.

Although Babylon and On was a great achievement for the band, their success did not last long and the next disc, Frank (1989), failed in sales, both in the United States and at home, partly due to insufficient promotion from the A&M label, and partly due to for changes in musical fashion. While on tour in support of Frank, A&M terminated Squeeze. Following this, Holland left to pursue a solo career, in particular while working as a presenter for the BBC. Not too discouraged, Squeeze recorded the live album A Round and a Bout via I.R.S. in the spring of 1990. Early the next year, they signed a contract with Reprise Records and began recording another disc, inviting keyboardists Steve Nieve, Bruce Hornsby and Matt Irving as session musicians. The result of their work, the album Play, appeared in the spring of 1991 and again, without receiving support from the label, did not arouse much interest. During the Play tour, the band recruited keyboardists Don Snow and Carol Isaacs. Longtime drummer Jilson Lavis leaves Squeeze at the end of the year to join Jools Holland's Big Band; he was replaced by Pete Thomas, who was a member of the Attractions.

In 1993, Squeeze renewed their contract with A&M Records and recorded their next CD Some Fantastic Place with Thomas on drums and Paul Carrack on keyboards. Released in September, the album became a moderate hit in Britain, immediately peaking at number 26, but was totally unappreciated overseas. In the next two years before the release of Ridiculous (1995), Squeeze went through another staffing change: Thomas left for Attractions, and Andy Newmark was taken in his place, and soon bassist Kevin Wilkinson also became a permanent member of the ensemble. Released in England in the fall of 1995, Ridiculous hit the charts again, and even produced the hits "This Summer" and "Electric Trains". Wishing to consolidate their success, the band again ventured to release the American edition of the disc in the spring of 1996 on I.R.S. Records, but the result was essentially a little better than its predecessor.

During 1996 Squeeze released a couple of compilations: the single-disc Picadilly Collection in the States and the Moderation counterpart in England. The following year, A&M UK released a Six of One boxed set ... containing remastered versions of their first six albums, plus two bonus tracks per disc. The next box set, slated for release in 1998, was never released. By this point, the band had fully fulfilled their contractual obligations to the label and, having entered into a new agreement with the independent studio Quixotic Records, released a new album, Domino, in November 1998. The disc was recorded with a new line-up of Difford and Tilbrook plus Jules Holland's brother Christopher on keyboards, bassist Heiler Penda and drummer Ashley Sone, a former member of Del Amitri.