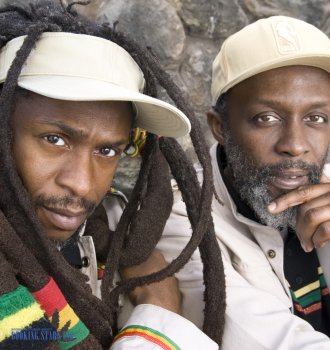 Steel Pulse is a Reggae band from the UK, formed in 1975.

Steel Pulse was formed in 1975. Natives of poor Caribbean families, David Hinds and Baszil Gabbidon, lived in the Birmingham ghetto, in the so-called Handsworth, were friends from school, which apparently prompted them to create a group.

Later they were joined by Ronnie McQueen (it was he who came up with the name of the group), Alfonso Martin, Salvin Brown and Steve Nesbitt.

The first performance was in one of Hensworth's bars. It was at that time that an extraordinary style of the group developed - nervous, abrupt, impulsive.

The concerts, however, soon ceased, for no one at that time was interested in the music of the Rastamans.

Under their wing, the group was taken, surprisingly, by punks. Steel Pulse's first global performance was during the Rock Against Racism Festival.

The only thing that the band members were annoyed with was that the black population did not attend rock concerts very much.

But it was about the troubles and aspirations of blacks that most of the group's lyrics were.

For the political aspect of their songs, the group suffered a lot during its existence.

In 1977 Steel pulse signed to Island Records, and a year later they released their debut album, Handsworth Revolution.

The album has been heavily criticized, as have some subsequent albums.

Why did the true Rastafarians of Steel pulse choose political overtones for their songs?

The group leader David Hinds answers this question: “We simply cannot ignore politics, because everyone who is born on this earth in some way plays a role in someone's political maneuver. And we are against weapons, drugs and everything that infects society. "

He also adds, "I want people to perceive Steel Pulse as a band that only tells them the truth." A truth that is the same for everyone, black and white. Whether you live in a prestigious area or in a ghetto, rich or poor, you must know the truth about life around you.

Steel Pulse is the best choice for your birthday party or any other corporate event! Fill in the application form on our website and enjoy the band's performance!