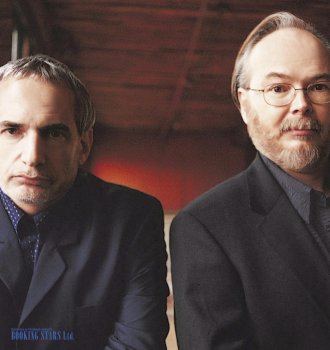 Steely Dan is a rock band from the United States, performing with elements of soft rock, funk, rhythm and blues.

Donald Fagen and Walter Becker became friends in college as they had similar interests in music (jazz, blues, pop) and modern literature (black humor). In 1967-68, together they played on a bunch of different teams.

Then Fagen and Becker got down to writing their own material, which they were trying to fit into some record company. After a long upholstery, the musicians managed to sign a contract with a small company owned by the group "Jay and the Americans". The guys worked with this ensemble until 1971, and then moved to New York, wanting to write songs on a professional basis. It was there that Los Angeles-based producer Gary Katz hooked them up with the guys at ABC / Dunhill.

He also invited the musicians to put together their own group, which they did not refuse. Borrowing the name for their project from William Burroughs' novel "Naked Lunch", Donald and Walter began rehearsals. They brought in Denny Diaz (guitar), Jeff Baxter (guitar), Jim Hodder (drums) and David Palmer (vocals) to help create their debut album "Steely Dan".

Since 1973, the group has toured in England and the United States, and its composition has often changed. Steely Dan also released two albums in a couple of years, Countdown To Ecstasy and Pretzel Logic. All the lead vocals were now performed by Donald, and Walter played the lead guitar. In 1974, the band's last tour took place, in which, in addition to the founders of the band, Mike MacDonald (keyboards, vocals), Jeff Porcaro (drums) and Royce Jones (percussion, vocals) took part. At the end of this event, Fagen and Becker decided to finally tie up with concerts and transfer the project to a purely studio basis. As a result, the following year, all other members of the ensemble were fired, and albums were recorded with the help of session musicians.

This affected the quality of the material for the better, and the "Steely Dan" records released during this period were in relatively high demand. The group's highest achievement was 1977's "Aja". Musicians such as Wayne Shorter and Lee Raithnur were invited to the session for this album, giving Steel Dan a more jazzy sound. "Aja" spent three whole weeks in the top five and received platinum on the basis of sales.

Unfortunately, ABC started having problems and the next album was delayed for three years. "Gaucho" was born only in 1980. The record also had good success, reaching the American Top 10, but the following year it was announced that Fagen and Becker had parted ways. Donald began recording a solo album, and Walter went to Hawaii to grow avocados on his ranch. The musicians resumed their collaboration in 1993, when Becker acted as the producer of Fagen's second solo album. The next year, the colleagues changed roles, and Fagen was already producing Becker's record.

And in 2000, former colleagues revived the "Steely Dan" sign and jointly recorded the first studio album "Two against nature" in 20 years. It turned out that old people can still produce quality goods, and the disc even received a Grammy for Album of the Year. This was not the end of the matter, and "Steel Danes" conducted a successful tour, and then went back to the studio to please their fans with another disc.