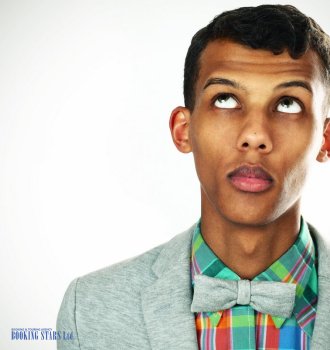 Stromae was born on March 12, 1985, in Belgium. He is a singer, rapper, and a songwriter. Stromae is mostly famous for such hits as “Alors on Danse”, “Formidable”, and “Papaoutai”. He holds a variety of awards, including World Music and MTV Video Music Awards.

Stromae (real name Paul Van Haver) was born in a small Belgian town Etterbeek. He had 4 brothers and sisters. His father, who gave the boy a dark skin tone, was from Ruanda. He died when Paul was young and the boy was brought up by his mother. Paul loved music ever since he was a kid and was one of the few students in his school who enjoyed music lessons. His favorite instrument was the drum

When Paul turned 18, together with a school friend, rapper JEDI, he recorded his first song “Faut que t’arrête le Rap”. However, it was the first and the last song they recorded together before splitting.

Stromae got a job on the radio and it was his chance to show his music to the public. That’s how the world heard his song “Alors on Danse”. It became a hit song of the summer of 2009. The song wasn’t popular in Belgium, France, Germany, and other European countries. In 2010, the song topped the charts in several countries. The single brought Stromae NRJ Award. Kanye West created a remix of the song and it became a hit in the USA. At the Music Industry Awards Ceremony the song was named “Hit Of The Year”.

In 2013, Stromae recorded his next album Racine Carre. It topped Belgian, Italian, New Zealand, and Swiss charts. The single “Papaoutai” from the album became a big hit. Stromae appeared on the covers of various magazines. Two more singles “Formidable” and “Tous Les Memes” became successful all over the world.

In 2014, Stromae along with other popular artists worked on the soundtrack to The Hunger Games: Mockingjay – Part 1.Stromae continues to work on new songs, gives live concerts, and goes on tours.