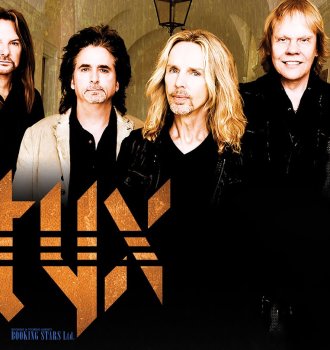 Most of the Styx band members used to perform for the group The Tradewinds (later called TW4), which was formed in the 1960’s. In 1971, Styx recorded a demo album, which was noticed by the representatives of Wooden Nickel Records. The next year, they signed a deal with the band. That’s when the band changed the name to Styx.

In 1972, the band released their first album Styx, which wasn’t very successful. However, their next LP Styx II reached the 20th spot on Billboard 200 and eventually received a golden status in the USA. The LP included a hit song “Lady”. In 1974, the song reached the 6th spot on Billboard Hot 100. As a result of such success, Styx signed a deal with a prestigious label A&M Records.

In 1975, the band released another album Equinox, which reached the 56th spot on Billboard 200. It included such hits as “Lorelei” and “Light Up”. The LP quickly earned a golden certification. The band went through some lineup changes and set off on a tour.

In 1977, the band released a very successful album, The Grand Illusion, which was certified platinum 3 times thanks to the hit singles "Come Sail Away", "Fooling Yourself (The Angry Young Man)", and "Miss America". The same success awaited their next album Pieces of Eight.

In 1979, according to a survey, Americans considered Styx to be the most popular band in the USA.

In 1981, the band released an LP Paradise Theater, which finally allowed them to top Billboard 200. Styx became the first band in music history to released 4 multi-platinum LPs in a row.

In 1983, Styx released the last successful album Kilroy Was Here and went on a hiatus until 1990. They reunited and released one more studio album before going on another break. The team finally reunited in 1995 and kept producing albums, none of which managed to repeat their previous success story. Styx continues to work on new projects and performs live.