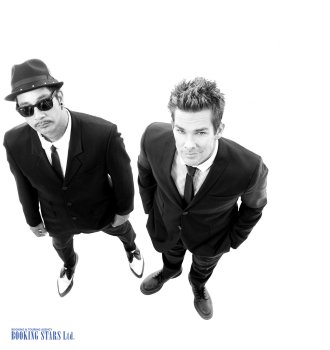 The rock band Sugar Ray was formed in California, in 1986. The current lineup includes Rodney Sheppard, Mark McGrath, Kristian Attard, and Dean Buttersworth. The band is particularly famous for such hits as “Fly”, “Every Morning”, and “Someday”.

After the formation, the band spent many years trying to get the mainstream popularity the members believed it deserved. They experimented with such music styles as pop rock and alternative rock. For many years, the band worked with Atlantic Records before switching to Pulse Music in 1999.

Initially, the band was called The Shrinky Dinx. But after giving a few concerts the members were sued by the company called Milton Bradley for violating the copyrights. So they had to come up with another name. The musicians decided to call themselves in honor of a famous American boxer Sugar Ray Leonard since they were his big fans.

In 1995, the band released their first studio album Lemonade and Brownies. The LP included such styles as funk metal, pop rock, and alternative rock. The songs sounded harsh and were very loud. The LP managed to make it into the Swedish Albums Chart.

In 1997, Sugar Ray released a hit song “Fly”. It was recorded together with a celebrity musician Super Cat. The single topped Billboard Hot 100 and Canadian Singles Chart. It was certified gold in USA and Australia. After the release of the song, many critics called Sugar Ray a “one- hit band”. However, the band wasn’t about to stop and kept gaining popularity.

In 1999, they released their second album 14:59. It reached the 12th spot on Billboard 200 and received two platinum certifications in the USA. The hit single “Every Morning” was certified golden in the USA.

In 2001, the band released another LP Sugar Ray. It was very popular in the USA, Australia, Canada, and other countries. The album contained a hit single “When It’s Over”.

Sugar Ray released two more studio albums, the latest one to date being Music for Cougars (2009). The latest albums weren’t as successful as the band’s previous work. However, they continue to work on new songs and perform live.