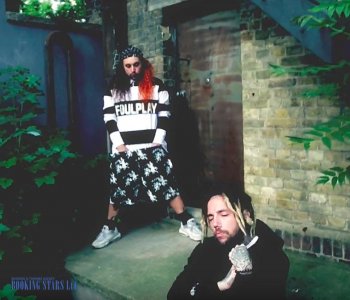 Suicideboys (also written as $uicideboy$) is a hip-hop duo from New Orleans formed by two cousins, Scrim and Ruby da Cherry. The two young artists created the band in 2014 and became popular by uploading their songs to SoundCloud. Hip-hop fans like Suicideboys for their deep and straightforward lyrics

Scrim was born on 11 April 1989. His real name is Scott Arceneaux Jr. Since childhood, Scott was a big fan of Kanye West and T-Pain. When he was a teenager, the aspiring artist bought his first laptop and started DJing. The young man attended college and performed at local parties. Additionally, he earned money by selling used furniture.

Ruby da Cherry’s real name is Aristos Petrou. He was born on 22 April 1990. The aspiring artist became interested in music when he was seven years old. Petrou learned how to play the violin and drums. When he was in school, the musician performed with one of the local bands. After graduating from high school, Aristos worked as a waiter in his father’s restaurant. He also continued to perform with a punk rock group Vapo-Rats as a drummer. Soon, Aristos left the band because it didn’t seem to help him hone his skills further. The artist decided to form a duo with his cousin Scott.

Young men were extremely serious about a music career. They wanted to change their lives and formed a band called Suicideboys. The name of the band wasn’t random. Cousins swore to each other that in case they fail, they would both commit suicide. The artists shared this in one of the interviews to Mass Appeal magazine. Thankfully, the band became successful.

The debut EP of the band was Kill Yourself Part I: The $uicide $aga. It came out in the summer of 2014 on Bandcamp и SoundCloud. The album attracted the attention of hip-hop fans. They were also noticed by an underground rapper Bones. In the next months, the duo recorded several new parts of the Kill Yourself series.

After releasing a few joint EPs with their friend Black Smurf, cousins started working on their debut mixtape, Grey/Grey. It came out in the spring of 2015.
The band’s breakthrough in the world of underground music happened after the release of an EP, $outh $ide $uicide in 2015. To record the album, the artists invited the rapper Pouya from Florida. He helped the young duo achieve success with the underground.

In the summer of 2016, Suicideboys finally made it into popular charts after the release of their next EP, Radical $uicide, with the assistance of the label, G*59. Several songs were recorded with Getter from EDM. The EP reached the 17th spot of the Billboard Rap chart. At that time, many clubs wanted to book Suicideboys for private events.

In September 2018, the duo released an LP called Radical $uicide. The album came out with the assistance of G*59. After the release, the artists talked about how they recorded the album. They started working on it back in 2017. The musicians wanted all the songs to talk about their personal experience and about how their lives changed as the music entered them.

Today, Suicideboys are very popular hip-hop artists. In their lyrics, they focus on depression and suicidal thoughts, which is appealing to the teenagers. The duo’s most popular music video is Paris. It collected over 65 million views.

At the end of 2018, some music magazines started talking about Suicideboys’ disbanding. The reason for such rumors was a careless twit. Soon, the band contradicted the information. Twitter posts were related to some personal problems between the cousins, which didn’t reflect on their careers.

In the spring of 2019, rappers recorded a new EP, Live Fast, Die Whenever, together with the drummer from Blink—182, Travis Barker, and a guitar player from Korn, James Shaffer.

While working on the band’s albums, both brothers were busy with solo projects and collaborated with other artists. Scott recorded Narcotics Anonymous, #DrugFlow2, and Patron Saint of Everything Totally Fucked, using the pseudonym Scrim. Meanwhile, Ruby da Cherry worked with Oddy Nuff da Snow Leopard on the mixtapes The Jefe Tape and Pluto.