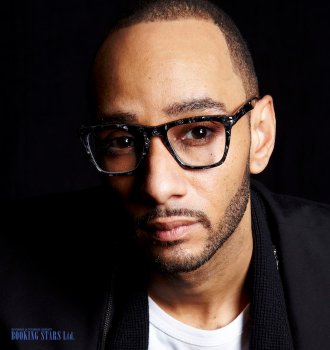 Swizz Beatz is the pseudonym of an American rapper Kasseem Dean. He founded Full Surface Records. Kasseem is considered one of the best hip-hop producers in the USA. He has worked with hundreds of famous artists. The rapper released numerous hits. All of his songs are full of energy. Rumor has it that it used to take Dean about 10 minutes to record one song.

Kasseem has Puerto Rican and African American heritage. He was born on 13 September 1978 in Bronx, New York. When the rapper grew up, he moved to New Jersey.

When Dean was still a young boy, his parents divorced. Kasseem’s mom brought him up. The boy borrowed his first musical instruments from his stepfather and uncle. When he was a kid, Dean wanted to become a DJ and managed to become successful on the local level. Then his family moved to Atlanta, and Kasseem started working with his relatives, who had a label, Ruff Ryders Entertainment. At 16, the artist got a chance to record songs professionally.

A year later, he sold one beat to the rapper DMX, who worked with Ruff Ryders Entertainment. The single "Ruff Ryders' Anthem" topped the charts. After that, Dean worked as a music producer for such singles as "Banned from TV" by Noreaga and "Money, Cash, Hoes" by Jay-Z.

In 2001, together with Clive Davis, Kasseem founded his own label called Full Surface Records. It was a branch of J Records. The first artist the label signed a contract with was the rapper Cassidy.

In 2002, Swizz Beatz released his first album, Swizz Beatz Presents GHETTO Stories. It brought the rapper popularity for his original style and ideas. The same year, he recorded two singles, "Bigger Business" and "Guilty", which made it into Billboard Hot R & B / Hip-Hop Songs Chart.

Kasseem kept working with Ruff Ryders and Roc-A-Fella Records. However, he was getting numerous offers from such companies as Elektra, Atlantic, Def Jam, Epic, and Bad Boy Entertainment. Many clubs wanted to book Swizz Beatz for private events.

In 2003, Dean married an R&B singer Mashonda, who helped Cassidy record such singles as "Take A Trip" and "Get No Better". In 2005, the couple had a son but soon divorced. In 2010, Swizz married another celebrity, Alicia Keys. They also have a son.

In 2007, the rapper released his first solo LP, One Man Band Man. To record the LP, the rapper invited such artists as Drag-On, Jadakiss, and others.

After a long pause in recording solo albums, in 2018, Dean presented Poison. Just before the album’s release, the rapper came up with a hit single “It’s Okayyy”, which wasn’t included in the LP. Out of about 70 songs, which he recorded for the past 11 years, only 10 made it into the album.

Swizz Beatz is a man of many talents. Since 2003, he is a partner of a well-known toy manufacturer, Kidrobot. Dean also makes his own toys and clothing. In 2010, he designed a new collection of sneakers together with Reebok.

The rapper is also a collector. He collects art by both renowned artists and beginners. Among them are Kaws, Keith Haring, Cleon Peterson, Ernest Zacharevic, and many others. His collection called The Dean Collection was featured at SCOPE Art Show. Dean and Alicia Keys are part of The Gordon Park Foundation. In 2018, the couple appeared on the cover of Cultured Magazine.

When Swizz has free time he sells his own paintings and donates the proceeds to the Children’s Cancer and Blood Foundation.

Even though Dean is busy with many other hobbies, music is still the main part of his life. He continues recording hits and promoting other artists.