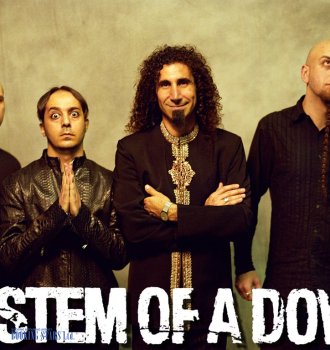 In 1995, two Armenian friends Serj Tankian and Daron Malakian formed System of a Down (SOAD) in Glendale, California. They invited their school friends Shavo Odadjian and Andy Khachaturian to join the band. During the next three years, the musicians dedicated themselves to recording four demo albums and a few performances at different events. In 1997, Andy left the band to work on his own project called The Apex Theory. He was replaced by John Dolmayan.

While performing at the local venues and events, the band got the attention of a famous producer Rick Rubin, who helped the young musicians get a contract with American Recordings.

By the summer of 1998, the new LP was ready. It immediately became very popular. The album System of a Down reached the 124th spot of Billboard 200 and eventually received a platinum certificate in the USA. To support the LP, the band recorded several music videos, which were successful on MTV. The most popular songs from the album "Sugar" and "Spiders" reached the 28th and 25th spot on Billboard’s Hot Mainstream Rock Tracks accordingly.

Besides that, in 1998, SOAD recorded a new single "Will They Die 4 You" together with several famous rock musicians, such as Mase and Puff Daddy. The song became a part of a compilation album Chef Aid: The South Park Album.

In 2000, the band continued the artistic experiments and worked with various musicians. Together with hip-hop band Wu-Tang Clan, SOAD recorded "Shame On A Nigga”. Later, they created a cover version of the single "Snowblind" by Black Sabbath.

In 2001, the band released the second album Toxicity. A day before the release, the group’s concert was cancelled because too many fans showed up. The cancellation wasn’t met well by the fans, who ended up dealing with the police. Some of them were arrested. This event helped the upcoming album become even more popular. It received a big variety of platinum certificates in many countries. As of today, the LP sold over 12 million copies. It topped the USA and Canadian charts.

Two songs, which didn’t make it into the album, were stolen and appeared on the Internet. Due to that, the band had to hurry up and record a new LP, which featured these songs in good quality. The album was released in 2002 and got a telling name Steal This Album! After the release of this LP, the band members decided to slow down and stop touring so much. They dedicated their time to new albums.

In 2005, SOAD released two albums Mezmerize and Hypnotize. Both LPs went platinum and topped Billboard 200 in just one year.

In 2006, the song "B.Y.O.B." brought the band a Grammy Award for The Best Hard Rock Performance.  Another song "Lonely Day" was also nominated for this award. The same year, the band decided to take a break, which eventually lasted 5 years. The musicians were busy with solo projects.

In 2011, System of a Down came back on stage and started giving concerts while touring the world and performing at rock festivals.

In 2016, the band announced their plans for the next album. However, as this article is being written, the LP is still in the works.

Book System of a Down