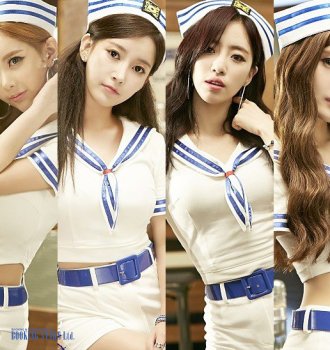 T-ara appeared in 2009 with the support of the recording label Core Contents Media. The initial lineup featured five young women, Jiwon, Jiae, Eunjung, Hyomin, and Jiyeon. The name for the girl’s band was chosen to inspire the artists to be queen-like since a tiara is an important part of the queen’s attire. The artists debuted with their first single “Joheun Saram (Ver. 1)" in April 2009. It was used as a soundtrack for the South Korean TV series Cinderella Man.

Before the group achieved its first popularity, Jiae and Jiwon left due to internal disagreements. They were replaced with Boram and Qri.

In July 2009, the group performed live for the first time on the TV show Radio Star on MBC. They also appeared on another TV show M Countdown with new songs "Geojitmal" and "Norabollae?". In September, the girls recorded another single "TTL (Time to Love)". To create it, they worked with such artists as Kwangsu, Jihyuk, and Geonil from Supernova. The single sold almost two million copies. In October, the band presented a new single, "TTL Listen 2", which didn’t manage to become as successful as the previous one.

In November, the band officially released its first LP, Absolute First Album. The album climbed to the second spot of South Korea Gaon Album Chart. It featured such hits as "One & One", "Tic Tic Toc", "Like the First Time", and "Apple is A". After the album’s release, many fans wanted to book T-ara for their private events.

In 2010, the group presented its first EP, Temptastic, which came in second on the national South Korean Albums Chart. The single “Yayaya” featured in the EP, sold almost 1.5 million copies, which was a huge success for the team.

In 2011, the artists recorded two EPs, John Travolta Wannabe and Black Eyes. They reached the 3rd and second position of the official South Korean chart accordingly. The commercial success of the albums was substantial. The first one sold 34,000 copies while the second one – 52,000. The first EP featured a huge hit "Roly-Poly”. In South Korea, it sold 4.5 million copies.

In 2012, the band recorded its first album for the Japanese audience. It got the name Jewelry Box. Right after that, the musicians presented an EP, Day by Day. The LP climbed to the 2nd spot of Japan Oricon Albums Chart, which was a great result for the first Japanese album. The EP reached the 5th position in South Korea and came in 28th in Japan. The single “Day by Day” became a hit and settled on the 2nd spot of South Korea Gaon Digital Chart.

The same year, the group came up with a new EP, Again. It came in second on the South Korean Chart and settled on the 45th spot of the Japanese Oricon chart. The single “Number Nine” became a hit.

In 2014, the musicians recorded an LP, Gossip Girls and an EP, And & End. Both albums earned substantial popularity, reaching high spots on the charts, The EP appeared on Billboard’s World Albums Chart. The single “Sugar Free” from the EP became a big hit.

In 2016, the group recorded one more EP, Remember. The next one, What's My Name? came out a year later. Both were successful on South Korean and Japanese charts. Single “What’s My Name” became popular.

In January 2018, the group decided not to prolong the contract with the label. However, the artists didn’t disband. A quartet consisting of Qri, Hyomin, Eunjung, and Jiyeon continues recording songs and performing live.