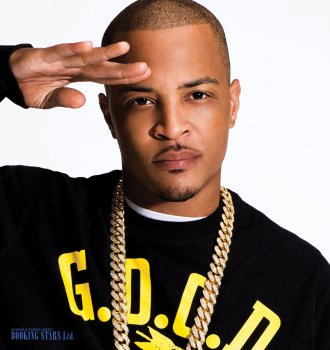 T.I.’s real name is Clifford Joseph Harris Jr. He was born on 25 September 1980 in Atlanta. The aspiring rapper attended Douglass High School but dropped out to pursue a music career. Clifford’s pseudonym originates from the nickname he had in school. Initially, he called himself Tip but after signing a contract with LaFace Records, decided to shorten it to T.I.

In 2001, with LaFace Records, the musician recorded his first studio album, I’m Serious. It climbed to the 98th spot of Billboard 200 and the 27th position of Top R&B/Hip-Hop Albums chart. In the USA, the album sold 165,000 copies. It was famous for such songs as "Still Ain't Forgave Myself", "What Happened?", "You Ain't Hard", and "Why I'm Serious".

In 2003, T.I. released his second studio LP, Trap Muzik. It reached the 4th spot on Billboard 200 and came in second on Top R&B/Hip-Hop Albums. In the first week of sales, the album sold over 110,000 copies. Later, it became platinum. The singles "Let's Get Away", "Rubber Band Man", and "24's" were popular in the clubs and on radio stations.

T.I. called himself a southern rapper. He didn’t just record his own music but wrote songs for other artists as well. Between 2003 and 2006, the rapper was in jail. He was convicted of drug possession.

While in prison, T.I. presented his new album, Urban Legend (2004). The success was impressive, especially considering that the artist was in jail. The LP sold 195,000 in the first week. It reached the 7th spot on Billboard 200 and topped Top R&B/Hip-Hop Albums and Top Rap Albums charts.

In 2006, the rapper was released from jail and immediately recorded his next studio album, King. The LP sold more than half a million copies in the first week. It topped Billboard 200 and earned two platinum certifications in the USA. The songs "What You Know" and "Why You Wanna" became big hits. At that time, many fans started trying to book T.I. for different events.

A year later, the musician recorded one more album, T.I. vs T.I.P. Many songs featured in the LP were recorded together with Nelly, R. Kelly, and Lil Wayne. The promotional single “Touchdown” came in ninth on Billboard Hot 100. The songs "Big Shit Poppin' (Do It)", "Help Is Coming", "Watch What You Say to Me", and "Don't You Wanna Be High" became international hits. The album topped Billboard 200.

In 2008, the rapper released a new LP, Paper Trail. The album conquered Billboard 200 and became platinum twice. In the first week after the release, the LP sold more than half a million copies. The single "Swagga Like Us", recorded with Kanye West, Jay-Z, and Lil Wayne, reached the 5th position of Billboard 200. The same year, the rapper and Mariah Carey recorded a hit single "I'll Be Lovin' U Long Time"

In 2010, the musician released one more album, No Mercy. It was slightly less popular than his previous work. The album climbed to the 4th spot on Billboard 200.

In 2012, T.I. presented Trouble Man: Heavy Is the Head. It came in second on Billboard 200 and earned a gold status.

In 2014, the musician released one more album Paperwork, produced by DJ Mustard, DJ Toomp, Tommy Brown. It climbed the 2nd position of Billboard 200 but didn’t earn any statuses from RIAA.