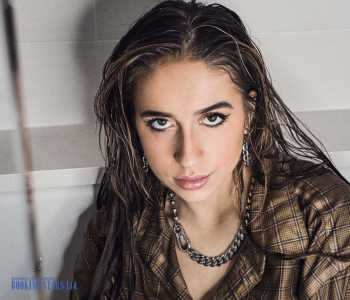 A Canadian singer and dancer, Tate McRae makes emotive alternative pop. Following her viral emergence in 2017, she released her debut EP, All the Things I Never Said, featuring the Billie Eilish and Finneas O'Connell co-write "Tear Myself Apart."

Born Tate Rosner McRae in 2003, the Calgary native initially started out as a dancer at age six and studied at the Alberta Ballet. She entered her first dance competition in 2011 and later took the silver medal at the final round of the Youth America Grand Prix in New York City in 2015. Out of the competition, she earned a scholarship for a two-week intensive course at the Berlin State Ballet School. The following year, McRae competed on FOX's So You Think You Can Dance: The Next Generation, finishing in third place. Along with dance, she developed an interest in singing and acting, appearing as the voice of the rag doll Spot Splatter Splash in Nickelodeon's Lalaloopsy animated series. In 2017, she launched her own YouTube channel by posting a song she had written in one day. The video went viral and helped her build buzz. More songs followed, and she eventually signed with RCA. In 2020, she released her debut EP, All the Things I Never Said. Included on the album was the song "Tear Myself Apart," co-written by Billie Eilish and Finneas O'Connell. Additional singles following throughout the year including "You Broke Me First" and "Lie to Me."