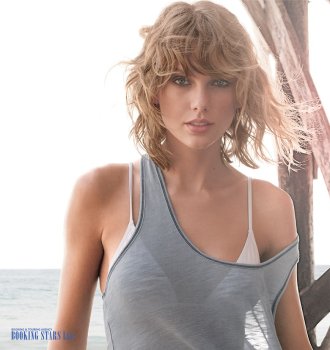 Taylor Swift was born on December 13, 1989, in Pennsylvania, USA. She is a singer and a songwriter. Swift is mostly famous for such songs as “Love Story”, “You Belong With Me”, “Shake it Off”, “I Knew You Were Trouble” and “We are Never Ever Getting Back Together”. She was nominated for 571 awards and won 273 of them, including 19 American Music Awards and 31 BMI Pop Awards.

Taylor Swift was born in Reading and then moved to Wyomissing. Her father works at Merrill Lynch and her mother is a homemaker. The singer has a younger brother, Austin. Swift went to a privet school Wyndcroft. Ever since she was young, Taylor was interested in music. She performed at Berks Youth Theater Academy, where she landed roles in such musicals as Grease, Annie, Bye Bye Birdie, and The Sound of Music. Taylor was influenced by Lee Ann Rimes and her grandmother, who was an opera singer.

When Taylor was ten, she learned how to play the guitar and started writing songs. That’s when she decided to pursue a music career. When she was twelve, Swift sang the national anthem at the Philadelphia 76ers game. When Taylor was a teenager she was noticed by Scott Borchetta, who signed her with his own record label Big Machine Records.

In 2006, Taylor recorded her first single “Tim McGraw”. It reached the 40th spot on Billboard Hot 100. Eventually, it was certified platinum by RIAA. The same year Taylor released her debut album Taylor Swift. It was a big success in the US, Australia, Canada, UK, and several European countries, where it received platinum certifications. The album sold over 5 million copies in the US only.

In 2008, Swift released her next album Fearless. It was more popular than her previous LP, selling over 7 million copies in USA and topping Billboard 200 and Canadian Albums Chart.

Taylor went on to record three more albums. The latest one to date, 1989 (2014) was her most successful work so far. It sold over 9 million copies worldwide and topped US, UK, Australian, and UK Albums charts.

Besides singing, Taylor tried herself as an actress. She landed a few roles in such TV series as CSI: Crime Scene Investigation and New Girl. Taylor continues to write new songs and performs live.